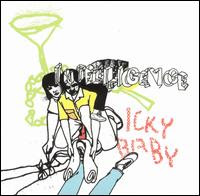 THE INTELLIGENCE are at the vanguard of a nearly-undefinable scene that's part post-punk reverence, part noisy, metallic shard rock & part garage. The chief practitioners of said scene often operate on labels like Dragnet, S-S, Narnack and sometimes Troubleman Unlimited. This shifting-clientele Seattle group have recorded for several of these, and have now moved to In the Red, a label not typically associated with cut/paste metallic shard rock of a post-punk, garagy nature. I've spent some time getting to know the new record the past couple weeks, and I think it's fair to say I like the other one, "Boredom and Terror", more. Where that one was often distant and experimental in a real weird, puzzling and rocking way -- and honestly, sounded like something right out of a 1980 bedroom recording studio in Swindon, UK -- this one's a little more wedded to the straight-on, straight-up pummel. I hear traces of recent-vintage FALL, even in the vocals (nothing wrong there), and I'd be lying if it didn't at times approach some of the A-FRAMES' earlier stuff in stark/bleak tone & attitude. They do, as you may know, share a member. But little sticks to the ribs. It's a lot of big sounds & flying razors, but not a whole lot of 'em are cutting through and violently piercing my spleen, esophagus & bile duct if you know what I mean. Others have already definitively pegged this one as some sort of 2005 landmark, and I won't stand in their way, just on the sidelines.
posted by Jay H. at 8:56 AM