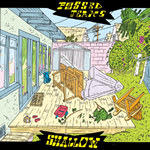 Are you familiar with Pennsylvania’s tastefully-named PISSED JEANS yet? If not, time to get cracking – they are very quickly among the USA’s top tier electrified, riff-heavy musclebound rock bands, and have improved upon their hot 45 from earlier this year with this screamer of a CD. I hear elements of a warped and desperate BLACK FLAG all over this thing, from some of the exploding Ginn-like leads proudly played on guitar, to the general paranoia and pissed-off bashing throughout. The singer is a credible John Brannon-style howler, as well, so if you can picture being all hopped up on goofballs at a 1986 “Day on the Green” stadium blowout starring final-LP Black Flag, the Laughing Hyenas and DRUNKS WITH GUNS, it might come close to where this record will settle in your noggin as well. It’s some intense shit. The openers are just roaring – “I’m Sick” and “Boring Girls” are merciless, louder than most anything I’ve heard this year and about two steps to the right of an all-out noise war. I therefore find the soft piano at the end of the 7:23 heavy metal whomper “Ugly Twin” very – comforting. A nice and needed touch. PISSED JEANS are just young fellas, as I understand it, and that they’re already playing at such a high-water mark this early in the game means that they’ve probably got some raw and bitter vittles to forcefeed the masses in the months to come. “Shallow” just might be the record that finally unites the punks, the skins, the metalheads and the noise dorks – and in these crazy, hazy, lowdown, mixed-up times, who wouldn't want that?
posted by Jay H. at 4:03 PM