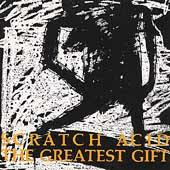 I think even back in March 1987, I knew I was pretty lucky to have seen SCRATCH ACID play live, not simply because I could sense that they'd break up soon (which they did), but because they seemed fairly groundbreaking in their way even at the time. The show was at a dumpy club in small college town San Luis Obispo, California with two bands I'll have a hard time forgetting: "GROUP SEX" and the "WIMPY DICKS". The latter were some dumb-ass local favorite funnypunk band with songs that ragged on their town, but the former were just on fire the night I saw them. Whenever someone asks me about memorable shows I've seen -- which, truth be told, never actually happens -- I tell them about Group Sex in SLO, CA. (We're going to talk about Scratch Acid later, don't worry). The band came on stage with two identical-twin bearded drummers with full kits, the sort of beer doggie dudes you'd expect to find sucking down Coronas at the Cabo Wabo Cantina, and this boyfriend/girlfriend pair on guitar and bass respectively. (I later learned that their names were "Ron E. Fast" and "Janey"). The two drummers started in together with this ripping-fast hardcore-tempo pattern, and the guitarist started to hiss and feed back and play some generic HC riff. After about 10 seconds, though, someone -- it appeared to be the bass player -- screwed up, with unleashed a torrent of filthy invective from Ron E. Fast ("You motherfucker goddamn sonofabitch whythefuckcan'tyouplay etc."). Janey actually started to blubber and cry right into her mic, and profusely apologized to the crowd.

So the two goofball drummers started up their hardcore beats again, but this time "Fast"'s guitar shorted out or something, and everything ground to a quick halt. He immediately hefted his guitar, and shattered it into a bazillion pieces with one swing against the brick back wall behind the stage. The shocked whole crowd let out a collective "whoooa....", and then Janey just started crying again. She stood there at the mic bawling and shaking, "You don't understand you guys, he's really a nice guy, he really is, we're really a lot better than this, please don't hate us you guys....". Just then, the house lights came up, and the soundman quickly threw on some 1976 vintage disco music, "I Love The Nightlife" or something, and in seconds, Ron E. Fast and Janey jumped from the stage and immediately started disco-dancing together on the now-cleared floor. As everyone stood watching them in total awe, a "little person", also bearded, scampered out from behind the sound board and started picking up the guitar pieces from the floor. It was beyond belief, and they were only the opening band! We ran out to the car immediately to relive and retell the moment over a 6-pack of Mickey Bigmouths. W-o-w.

So thanks for letting me get that tale off my chest; it has only lived on via the oral tradition thusfar, and of course, it was far more weird and ridiculous than it likely reads to you on the screen. SCRATCH ACID were great that night, of course, a total blitzkreig of gutteral grunting & aural assault, just as we'd all hoped. At that point in my life I was listening to their 1986 LP "Just Keep Eating" almost every day, and what strikes me listening this past week to this retrospective near-complete CD is just how uh, "multi-disciplined" the band was. I mean, you hear flamenco flourishes, spaced-out post-punk shambling, horn-driven funk, cowboy C&W and even droll fake jazz sprinkled in amongst the filth and the fury, which made the band a real deceptive cluster of musos (and we thought they were just a bunch of evil junkie hicks at the time, except for the drummer Rey Washam who everyone knew was a God). This collection is one of those compleat things that they sequenced chronologically exactly as they should have, from the barrelling 1984 debut EP, into the awesome "Just Keep Eating" and right through their swan song EP "Berzerker". Never liked "Berzerker" much at the time, still really don't, but I fell so hard for those first two records that nearly anything would've been a letdown. David Yow comes off as a snide, intelligent and somewhat dangerous freak, a pretty accurate desciption of what he seemed like when we pumped up his ego after the show. I understand from a little tiptoeing around the web that a whole new generation regards these guys, not Yow's mediocre subsequent band the JESUS LIZARD, as some real-deal pioneers of demented drug rock. Sometimes the kids -- they get it! A 100% recommended disc for anyone's CD shelves, even your mom's.