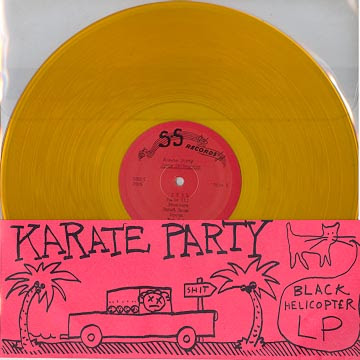 Been listening to a little rock and roll music lately that I’d like to talk with you about. Let’s start with a brand new LP collection of punk also-runs called “STARING DOWN THE BARREL – RARE PUNK 1979-83”. It’s pretty common knowledge among the KBD set that the mother lode of eye-popping punk obscurities has already been stripmined, but hidden away in the veiny tentacles of ore are a few cool scorchers. This comp is full of unknown American middlers like the DUCKY BOYS and the PSYCHOTIC FROGS, but it also contains the snarling “Who Needs Wildlife Anyway” by GRACKIES, which is as godlike as anything from 1978 Australian heroes RAZAR or the LEFTOVERS & brings the white heat in a similar fashion. Another great number is UNKNOWN SOCIETY’s “You Hippy”, a fast one with the same snarling hatred of longhairs as the germinal DEADBEATS song that kicked off the whole hippie-destructo micro-genre. Top-tier stuff, and reason alone to go hunt this comp down.....A couple of weeks ago we were discussing England’s LONG BLONDES and their well-done post-punk rehash pastiche; way back then I hadn’t heard their debut 45 from last year, “New Idols / Long Blonde” – now I have, and it’s outstanding. Sharp, somewhat danceable stutter-pop that plays well in both the raw DIY and “alterna-rock” ghettos, and maybe the best of their three seven-inches if you ask me.....The LB’s label ANGULAR RECORDS appear to leading a UK revival of smart & tuneful weird pop, and their label sampler “Rip Off Your Labels – More Angular Product” has got some real neat stuff, not the least of which is the Long Blondes’ fantastic “Autonomy Boy”. Others to keep on your radar are heavy-breathing girl-led rawk bands THE VIOLETS and THE SWEAR, and the shambling art looseness of ART BRUT and THE SHOWBOYS. There’s some “bollocks” on here, too, but what label comp doesn’t have at least a pinch of that?

Two albums in and I can’t get a handle on THE GRIS GRIS. Their brand new CD “For The Season” sports terrific surround-o-phonic production, some explosive musical ideas, and a lot of searing guitar chops spurting out where you least expect them. But all told, the album’s a stone bore, guilty of fantastic overreach. The band’s unfulfilling, haphazard song cycles appear to be written as if creating a dark psychedelic masterpiece for the ages was utterly non-negotiable. I’m sorry, but they’re just not there yet. You get the sense that some someone is thinking as if they were a step removed from Brian Wilson or Syd Barrett, and proceeds with songwriting accordingly. I remember people came down hard on THE FLAMING LIPS a couple albums in for many of the same reasons, and hey, their best work was still ahead of them. Maybe the benefit of the doubt would be a good pose to strike with The Gris Gris, since the kernels of truth and enlightenment are hiding in there somewhere.......One surprise LP reissue that I’m really enjoying is a set of 1997 sessions from Sacramento’s defunct KARATE PARTY on S-S Records called “Black Helicopter” . Their one and only 7”EP is collected here, along with a passel of throbbing, mechanical robo-punk that sat on tapes for 8 years. In fact the unreleased stuff (“Quality”, “Trouble”) is even more killer than their EP, a little less daffy and more full of precision-pinpointed blood and fire. Excellent!.....Finally, I’m starting to go on a LEE HAZELWOOD bender again, like I did three years ago until I flamed out hard. It’s not pretty. I think my wife hates Hazelwood more than anything I’ve ever played her, so I’ve been listening to my new “Requiem For An Almost Lady” CD on the iPod & car CD player like a bat outta hell. This is the most troubadour-like of Hazelwood’s 60s LPs, the least corny and the most sparse. No syrupy strings or angelic female voices, just Lee acoustically meditating on love & loss & of course, all the babes he’s slept with. It belongs in any proper Hazelwood collection for sure, right alongside “Love And Other Crimes”, “Cowboy In Sweden” and my very favorite, “Poet, Fool or Bum”.....That’s all for now, keep your feet on the ground etc.!!!
posted by Jay H. at 6:57 AM