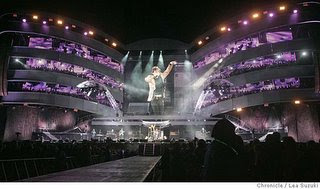 I’d say I’ve had about 5 real chances to see the Stones in my lifetime, and I passed without a second thought every opportunity, until this one just fell in my lap and I was presented with a “Well, do you want a ticket or not?” quandry. After a night of sober and ponderous reflection, I reckoned that it’s one thing I could easily cross of my list of things I must do before I die – or rather, before they do. Ha ha!! Pretty good one, hunh? The Stones – they’re old!! Like older than my dad!! Oh sure, there are some ripe pickings to lob ridiculous critical mortars at – like the mega office park backdrop monstrosity they played their set in front of and shot fireworks from. It looked like the Cisco Systems corporate campus, but instead it was supposed to be some wild kick-ass rocknroll laserium fortress. The giant “Ameriquest” banner hanging from said office park structure did nothing to deaden the effect, but so it was. Something called EVERCLEAR opened up the show, but me and my loadie friends were in the heavy metal parking lot tying one on with gusto, you know what I mean? We walked in as METALLICA were revving up their set with some chimes and gongs and opera-like mush to get the massive crowd pumped, before ripping into a couple of speed metal furies that actually sounded pretty hot. I mean, the kind of ultrawattage pouring out of those immense enormodome speakers was just intense, and it was hard to argue with the crunch of the band’s riffage when they were playing them fast-n-heavy. Naturally, a big stadium show with 80,000 boneheads pumping their fists must be approached slightly differently then, say, a night at the Hemlock Tavern, so when I say I “enjoyed” Metallica – I sincerely enjoyed Metallica, while admitting that I expect to know about as many of their songs 5 years from now as I do today (which is three, none of which they played, not even the Misfits cover).

Man oh man was I glad to hear the ROLLING STONES kick off their set with the trifecta of “Ventilator Blues/Turd on the Run”, “Jigsaw Puzzle” and “Cocksucker Blues”, and then follow those up with killer versions of “Loving Cup”, “Stray Cat Blues” and “Down Home Girl”. Nah, actually it wasn’t really those, those were the ones we talked with pointless naiveté about them doing before the show – it was, ahem, “Start Me Up” followed by a couple of numbers from the “A Bigger Bang” compact disc. Have you heard it? Neither had anyone else in the crowd, but most were so baked or liquored up or just starstruck they didn’t care. Truly, the band actually then lit into great versions of “Live With Me”, “Tumblin’ Dice” and “Sweet Virginia”, easily the highlights of the set, particularly the latter. In all honesty, it was no different than watching a live-at-Altamont video or ’72 tour footage – having played these songs their entire lives, the band knocked them out quite well, and their energy level is something to behold at such an advancing age. I will say this – this chooglin’ little rock and roll band from London town knows how to entertain its customers! Grandpa got his “Paint It Black” and “Get Off Of My Cloud”, Dad got his “Brown Sugar” and “Honky Tonk Women”, and junior? Junior got METALLICA. At one point the stage – get this! – the stage magically teleported into the crowd, bringing us all face-to-face with a strutting Jagger and der weiss engel himself, Keith Richards! I saw him! Our seats were right in front of where Edgardo Alfonzo bobbles balls at 3rd base for the Giants, but I wasn’t thinking baseball thoughts tonight, no sir, it was all about living large with the Rolling Stones. After they finished torturing the crowd with the last of the new-record material, it was hit city all the goddamn way: “Satisfaction”, “You Can’t Always Get What You Want”, “Jumpin’ Jack Flash” etc. Unfortunately, they Vegased these three up so badly that they were interminable bores, what with the cooing black female backing vocalists, the incessant chanting of the chorus(es), the old “stay on the closing riff for seven minutes” shtick etc. I still had a great time, and I’m not saying that simply because contemplating the ticket price forces me to. In fact, I collected money to pay for this worship-the-dinosaurs show by selling old punk records & collecting it in my Paypal account. Now if that isn’t rich with irony, my friends, well – I don’t know. In any event, I’ve been there, I’ve done that, I’ve seen a band that all my peers went & saw when we were all 16 & it seemed at the time like it would be too lame to go see the Stones because the Stones were too old to rock, right? With the right attitude adjustment and a few choice beverages, even the Rolling Stones of 2005 will get yer ya-yas out, just don't leave them spewed & steaming all over the stadium parking lot, OK?
posted by Jay H. at 7:55 AM