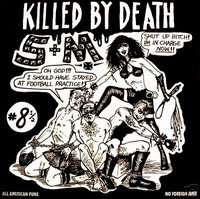 I don’t think I could exaggerate how just excited I was by that first wave of KILLED BY DEATH rare punk LP collections when they hit the tranquil shores of Santa Barbara, CA in early 1989. This price-gouging, questionably-run record store called “Rock House Records” got exactly one copy of KILLED BY DEATH #1 in, and immediately priced it at $25. That was pretty much all the cash I had to my name, but I plunked it down with glee, and then played the goddamn grooves right off that thing. I was getting pretty knowledgeable about LA and San Francisco punk of the late 70s thanks to a couple of wise mentors who had most of the right records, but some of this weird, lost Midwest & east coast stuff had never before had an opportunity to register with me, nor with my ne’er-do-well friends. KBD #1 was quickly followed by #2, #3 and #4, and though I’d heard a handful of the raw OOP private-press punk killers before, hearing CHAIN GANG, the NERVOUS EATERS, the QUEERS and the MENTALLY ILL for the first time was like Hanukkah in July, baby. Remember how eye-opening that stuff was? I became such a late 70s/early 80s-punk partisan & flogged FREESTONE, THE EAT etc. on my radio show so overexuberantly, that some pals actually put together a drunken punk rock cover band for a couple weeks, and, searching for the right mocking name, decided to call themselves THE HINMEN. I was flattered at the distance traveled at my expense, yet never actually saw the band practice or perform.

So here we are nearly 17 years later – the KBD flood has pretty much been dammed, and life-changing, rare US & worldwide punk rock can be easily found on numerous LP and CD volumes in any decent record store. Though there are exceptions to this rule, the higher the number on a Killed By Death LP (e.g. >12 or so), generally the lamer the contents. Likewise with the Bloodstains series – going with your gut, you’ll usually find winnings from a comp emanating from a larger, more populous nation such as the US, England or France – but you’ll find slim pickings when you traipse through (the former) Yugoslavia and Ireland, for instance. (An exception is Sweden, which appears to have had the hottest per-capita punk rock scene on the planet. Interestingly, Australia, whose punk rock track record was as good as anybody’s, has one of the worst “Bloodstains” editions). I decided to revisit some of the second wave of KILLED BY DEATH compilations, the ones that followed that first blast a couple years later (1992-95 or thereabouts). I bought ‘em all, but this one – KILLED BY DEATH Volume 8.5 – still stands as one of my 2-3 favorites of KBD Wave 2. It contains some of the big boys of punk rock lore, starting with the fast and angry “I Rock I Ran” by Louisiana’s TOXIN III. There’s the classy, tasteful “S&M” by PUBLIC DISTURBANCE, which is this strange cross between Dickies-like carnival punk and ultra-snotty punk/oi filth a la some of those UK acts with giant eye-gouging mohawks who roamed the era. Other classics that belong in any dabbler’s or obsessive’s collection: the gonzo & raw “Twinkie Madness” by THE COSMETICS; the hardcore-tempo fuzz-out “Killed In Jail” by the LATIN DOGS; and of course the deadly lo-fi piledriver “Killer Cain” by the mighty SHIT DOGS, a band made known to me by the LAZY COWGIRLS long before the term “KBD” turned into a household catchphrase and dating scene pick-up line. Only clunkers like THE MATCHHEADS and the TURNBUCKLES keep this volume from breathing the rarified air of Volumes #1-4, but that may be some internalized shock-of-the-new nostalgia talkin’. This is one of the ones you gotta have, and one the kids’ll be coming back to for millennia.
posted by Jay H. at 12:53 PM