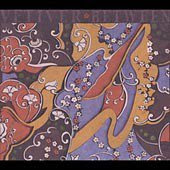 Last year VETIVER 's debut CD was one of the best things I heard in the whole darn 365 days, a confirmation of sorts that modern folk music had a couple of bold leaders who were inking their own 21st-century stamp on the ringing US & UK roots-folk of the late 60s/early 70s. Vetiver probably had the single best record of any of the acts most popularly recognized at the vanguard of said scene. This recent 5-song follow-up EP keeps the same gentle, flickering country-tinged flame going; each song - whether live, a radio session or home-recorded -- envelops in a lazy and very nice bit of pastoral strum. Neither too precious nor particularly adventurous, the band just is; the sort of laconic, intellectual GRAM PARSONS-lovin' stoners that might've been private-pressing their wares onto wax in 1973 and selling them at the flea market next to the caftans and hippie pants. This stuff fits into the superior "folk" nexus that I see JOHN FAHEY's work being a part of, not the diamonds-and-rust pablum my mom dug in '73 nor the one Six Organs of Admittance is attempting to pioneer. A subtle cutting of the microscenes to be sure, but however it's sliced VETIVER's songs get better with each listen. Since they live within a 10-mile radius of me I probably should put on my poncho & go see them live one of these days, hunh?
posted by Jay H. at 8:14 AM