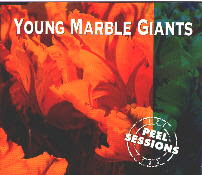 One thing that struck me upon hearing this brief five-song EP of John Peel Sessions this week was how the YOUNG MARBLE GIANTS' quiet minimalism was already beginning to evolve into an outsider's brand of weird, clipped instrumentals that served as their swan song on the "Testcard" 7"EP. This August 1980 set shows the band paused right between the more "full" (said with a laugh) sound of their classic "Colossal Youth" LP (recorded 1978-79) and the near-silent bumps and blurts of that last record. The band only lasted two years, and had a mere 3 months to go until their last gig when they recorded this. It's a special set, one you ought to stock on the shelf as soon as you find a few quid-n-bob to do so. It has an eerie trance-like version of my all-time top song of theirs, "N.I.T.A.", as well as the 1:28 number that become most folks' first exposure to the band via the "Wanna Buy A Bridge" comp, "Final Day". There is also a short aforementioned instrumental called "Posed By Models", and a general sense throughout the disc of trying to tone down the atmosphere and suck out all extraneous thought, sound and chatter from the room. YMG were mostly successful at this on everything they recorded, and they were by far one of the most unique & inventive of the UK post-punk groups they ran with circa 1978-80.
posted by Jay H. at 8:49 AM