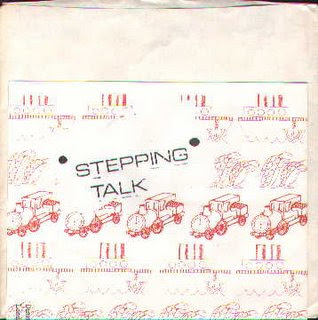 One of the great under-the-floorboard artifacts of the late 70s flowering of UK bedroom post-punk is the four-song EP from Camden’s STEPPING TALK. Low-key and aimless to a fault, it illustrates perfectly that special rainy, damp, cold leftist/labour D.I.Y. sound that encapsulates barely-pre-Thatcher Britain in 1979. As I understand it, the band were drinking pals with the early SCRITTI POLITTI, with whom they share that shambling, agitprop-infused approach. “Alice in Sunderland” employed the two-concurrent vocals trick popular at the time, where one guy sings and a girl tells a totally unrelated story on top of him. Weird horns float in, out & around a thumping but lackadaisically-played bass. The excellent “Common Problems” sounds as if the band, attempting but failing to play in unison for most of the song, had a piece of carpet pulled from under them midway through & scrambled to keep playing in spite of it. The form and construction of these little set pieces owe something to jazz, but more likely there were a very deliberate attempt to pull off something jazz-like by playing particular instruments in sequences exactly backward of what one would expect from the rock music of the day. The instrumental “John’s Turtles” is the most experimental of the bunch, and sounds like a strange & frightening tribute to some peculiar British-created white man’s dub. It’s a really cool period piece from an era in which it seemed like 20 of these warped, provincial slices of indie vinyl came out every week in the UK and US.
posted by Jay H. at 8:54 AM