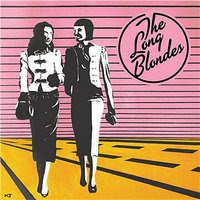 The UK's LONG BLONDES continue their relative hot streak with another fine ultra-limited 45 of boistrous, tuneful heat-seeking pop music, this time especially raucous-n-fast. It reflexively recalls the choppy, static-filled early 80s bass-driven post-punk combos to whom they're so frequently compared, but this time I'm hearing something more zippy & yeah, maybe a little more commercial -- but like you always say, a great tune's a great tune, and "Motorways" is one of those. I more than half expected that anything they put out since their last merely decent one was going to blow, given the natural trajectory of bands fronted by good-looking, sharp-dancing, clear-throated people, and I was dead wrong. I also like the capitalistic notion of selling it as a physical 45 (which sold out in about ten minutes -- I'm telling you, the kids are all over this band like white on rice, baby) and as a cheapo download. I opted for the latter, lest my cashier's cheque get lost "in the post", and it was kinda weird plunking down .77 pounds per song over at something called 7 DIGITAL. But it was worth it, supporting the scene and all. Anyway, I keep getting the sense through records like these that there's a new beachhead being opened in 2005-06 for smart, minimal, hooky pop, maybe the best stuff of its ilk since the early 80s. The Long Blondes are my "favourite" of the bunch, at least until they're not. I'll also cop to the fact that where I'm hearing KLEENEX and the DELTA 5, you might be hearing BOW WOW WOW. Check out the free video for "Separated By Motorways" and see for yourself.
posted by Jay H. at 7:59 AM