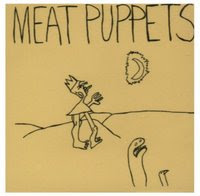 Rather than an entirely new gush about this fantastic record, I'm going to repurpose something I wrote in 1997 for an old fanzine....

Many fans who looked to skirt the boundaries of rote hardcore aggression during the early 80s fell in love hard with two genius bands: FLIPPER and the MEAT PUPPETS. The latter were the wacked-out anti-hardcore band circa 1981-82 that lived to torment the legions of wasted kids that showed up to see Black Flag or whoever, and instead found themselves taunted by 2 longhairs and a regular guy screaming their way through country standards like "Tumblin' Tumbleweeds". Only the creator knows where these Arizona lunatics got their singular vision from - a vision that has them rumored to have once performed "The Decline of Western Civilization" soundtrack, talking and all, in its entirety live at just such a concert. Probably from a big bag of pot? That's the most likely story we've heard so far.

Their first single is a monument to creatively destroying the punk rock idiom by working from within. "In A Car" and "Dolphin Field" burn by at 1:20 and 1:06 respectively, and contain the crazed, wild-eyed Curt Kirkwood vocals he later ditched in favor of a laid-back stoner twang (of course the band did a countrified 180-degree turnabout a year or so later on "Meat Puppets II"). "Out In The Gardener" is a confused, loping 60-second instrumental, and the closing "Foreign Lawns" contains what might be the single greatest final second of a song ever: duh-nuh-nuh-nuh-nuh-nuh-nuh-nuh-nuh-nuh-nuh-CLANG. Clang!!?? It's as if they hopped off the distortion box one second too soon, and it's totally fried. The Meat Puppets are also responsible for perhaps the greatest opening second of a song as well - The drumstick/cowbell intro to "Teenager(s)". SST have re-released this beauty several times - it's pure American brilliance that belongs in every home and hearth.
posted by Jay H. at 8:47 AM