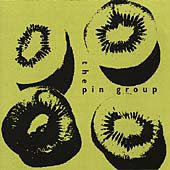 Lost in all the clamoring over genius worldwide early 80s post-punk experimentation were a couple dozen great bands crafting their own murky, homemade, low-fidelity sound in deepest New Zealand. Some of these acts, such as THE CLEAN, built long careers out of their art; others sputtered and died on the vine rather quickly. One of my very faves from the latter camp were Christchurch’s PIN GROUP, an act who toiled long enough to release two doomy, psychedelic 45s and a 12”EP that would have been manna for those clamoring for a note-perfect VELVET UNDERGROUND / JOY DIVISION hybrid, had such a plea been actually rendered in 1981-82. Siltbreeze packaged all this stuff up on a CD in the late 90s, and we’re all the better for it. The band featured younger versions of characters who would come to define the South Island scene in the 1980s and 1990s – Roy Montgomery (excellent solo work, Dadamah, Dissolve), Peter Stapleton (Terminals, Scorched Earth Policy), Ross Humphries (Great Unwashed) -- during a time when they were the vanguard of the dissonant, heavy-reverb New Zealand scene taking shape. In point of fact, their first 45 was even Flying Nun’s first release.

So like I said, at times the band mournfully augmented their very choppy, Velvets-inspired guitar attack with a general sense of foreboding and dread, similar in overall feel to the then-forming but as-yet-unlabeled “goth” scene. Not for nothing was Roy Montgomery nicknamed “Roy Division”! Yet these guys incorporated harmonies at times, and an array of post-psychedelic paisleyisms in the guitar sound that often kept the feel a lot lighter than, say, BAUHAUS or whatever. In fact, lest you sense that there was no sense of humor in the Pin Group, I direct you to their fine, understated cover of WAR’s “Low Rider” (!). Some real classics abound here – my favorite has always been the chipper “Coat”, which has a winding riff that coils downward into a slow grind and springs back up again to generate a healthy, warm, low-fidelity glow. I put this CD on the roundabout again this week and found nothing to shake my belief that this is one of the great forgotten bands of the early 80s. Now if we could just get that KIWI ANIMAL stuff out to the people.....!
posted by Jay H. at 8:07 AM