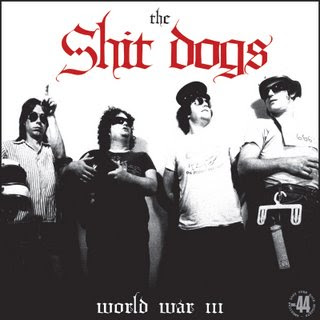 Remember that tidal wave of LP-only reissues of third- and fourth-string 70s punk bands that started spewing forth on Italian label Rave Up in the late 90s? Sure you do. Well, they just kept on coming – a recent addition to the pile is this one from Lousiana’s wrestling-loving 1980-1983 cheeseballs THE SHIT DOGS. We at Agony Shorthand have always been huge fans of these guys both in theory (they’re called The Shit Dogs, man!) and in practice. We first heard them as a 19-year-old LAZY COWGIRLS fanatic who followed every Southern California show of said band circa 1986-89; they debuted a new cover of the ‘Dogs “Reborn” during that epoch, and always took care to announce from the stage who had originally penned it. Great crap-fi, meathead punk number, and a few years later I heard the original on a “Killed By Death” along with the even better “Killer Cain” from the Shit Dogs’ “History of Cheese” EP. Their second 7”EP was called “You Bet!” – it’s all on here, along with some strong unreleased material – and it’s just as good n’ trashy as the first single, “Calling Dr. Modo” and “Flippin’ Burgers” in particular. One sore-thumb standout is “Under Slithery Moons”, a piece of ringing San Francisco psychedelia that’s well played and not jokey in the least. What’s not on here is the fine “Dog Style!” LP, which is nearly as bent as the 45s, and which completes a stellar discography of joyful obnoxo-punk unparalleled in their region and for the most part, in the USA. The band seem to have existed on the same who-cares, crap-for-crap’s sake mental plane as the SCREAMIN’ MEE-MEES, PENETRATORS and of course THE RAMONES, none of whom were crap in the least. Lousiana’s best rock band of all time? Hey, can you name a better one?
posted by Jay H. at 10:30 AM