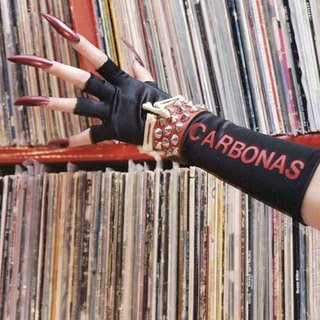 This bunch are part of the Atlanta garage-spew axis along with the BLACK LIPS, THE LIDS & a handful of other young noisemakers – this record on RAW DELUXE is their 2nd before a “jump” to the hallowed halls of Goner Records. What I like about this record is the vague tinge of long-ago bash-it-out Radio X perennials like Supercharger & The Brentwoods; there are a couple of tracks that have an ultra-fine ramshackle oldies vibe that sounds more pre-punk (think late 50’s) than punk. I also admire the cover. It breaks down for me on the majority of the tracks though, which (yet again) spotlight the whole c’mon-baby-we-goin’-out-tonight, c’mon-baby-let’s-rock-tonight doofus punk that I can’t believe still has a chokehold over such a large percentage of modern garage punk heads. At least the RADIO BEATS lay their lyrical pablum down over blinding, hardcore-level raw screech; THE CARBONAS merely work up the standard chugga-chugga meathead riffs on about half this record that every other young punker & his brothers come up with. I suspect there’s more to them than meets the ear given the level of excitement budding around them & the fact that some of their hotter numbers are so full of vigor & piss (don’t have the album in front of me now but the last one on Side 2 just smokes); give ‘em a listen and take a song or two from their MySpace page & see what you make of it.
posted by Jay H. at 9:36 AM