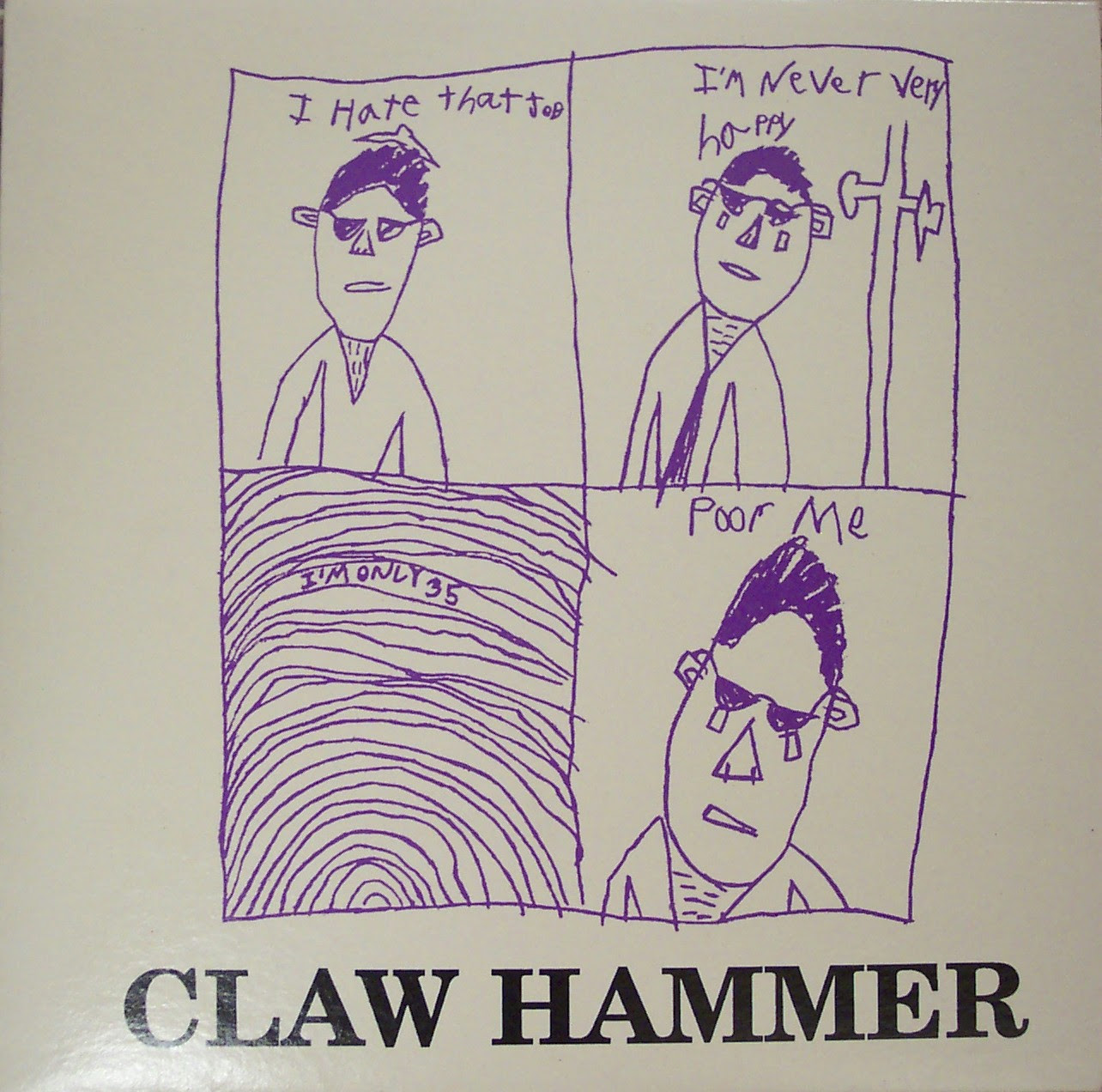 When CLAW HAMMER first came up through the Los Angeles micro-clubs, playing low on bills with punk & garage acts like THE LAZY COWGIRLS and their ilk, they were sort of a mystery act that took a while to get one’s head around. Were these guys approximating the MC5 playing for Deadheads? CAPTAIN BEEFHEART & THE MAGIC BAND playing acid-laced punk rock? Hampton Grease Band & Roxy Music freaks playing whatever the hell they wanted to play, and playing it really, really loud? Yeah, that one. It took me a couple shows to get the cut of their jib, but in due time they replaced the Cowgirls as “my favorite band”, and from about 1989 to 1993 or so they stayed in the proverbial catbird seat. I started my fanzine Superdope in 1990 and task #1 was to interview and glorify Claw Hammer, so I commandeered the band in their van in an alley at San Francisco’s most unsafe club ever, the 6th Street Rendezvous, and told ‘em I was their biggest fan and would they like to do an interview with me & be friends. They “made the cover” of my edition-of-400, hugely uninfluential magazine, and we did in fact become pals after that. In 1993 I was even their road manager/driver/drinking partner/merch dork on a 40-date North American tour. From that point on – after their first three (maybe two) albums and initial batch of 45s -- it was and continues to be my feeling that their creativity waned a bit and the mojo began to run dry, but when I come back to their early records, especially this very first single from 1989 on Australia’s Grown Up Wrong label, I remember why they were so incredibly special and unlike anyone else going at the time. Allow me to elaborate.

I remember that Eddie Flowers, creator/owner of the SLIPPY TOWN empire and then a sometimes-writer for Forced Exposure, did a piece on the early, early Claw Hammer for said magazine truly before even Los Angeles had woken up to the band (one could legitimately argue that LA never really did). Though I don’t have the article in front of me, Flowers saw the sonic connections that these guys were channeling, and how they funneled them into a sound that really hadn’t been heard before. Claw Hammer, for lack of a better word, were a “greasy” band (not just because of the Grease Band!), in that they played a relatively conventional brand of loud rock and roll that just bled and oozed raw grease and slippery counter-dynamics. When Jon Wahl and Chris Bagarozzi played guitar together, I swear to god at times it was like what everyone said Tom Verlaine & Richard Lloyd were supposed to have sounded like live – unpredictable bits of chaos, pure unbridled energy and extremely amplified sound, but never “showy” nor “flashy”. Just jaw-dropping, that’s all. These guys loved 70s rock – not just the cool stuff that everyone liked back then like The Velvets and the MC5 and the Patti Smith Group – but acts that have only in retrospect achieved complete critical consensus like the aforementioned Roxy Music, early Eno, Big Star, solo Syd Barrett and even (gasp) Steely Dan. They ingested it, turned it out and filtered it through their own experiences as teenage punks (Jon was in an Orange Country hardcore band wholly inspired by the MIDDLE CLASS called The Idle Rich) to create a rich stew of swingin’ punk rock boogie. That spirit was what Flowers captured in his article & what got the world to stand up and take notice – that and their first crop of singles, all of which were incredible.

Honestly, this review could be about any one of those first four 45s – this one, “Sick Fish Belly Up/Moonlight on Vermont”, “Candle Opera/Drop” or “Brother Brick Says/Don’t Walk Away”, so maybe I’ll cut it short and give you the name, rank & serial number of the “Poor Robert” 7”EP. The other two tracks were a frantic cover of the Beatles’ (!) “Everybody’s Got Something to Hide Except for Me and My Monkey”, and a harmonica-blastin’ fast Beefheartian blues called “Car Down Again”. “Poor Robert” itself is a majestic 5-minute-plus tale of Robert “Wild Man” Fischer as told by a third party. Jon once told me the story behind it, but I forget now. I haven’t heard from any of those fellas for years now so I figured it was safe to write something nice about them without coming across as a backslapping logroller – and besides, I still love those early Claw Hammer records and play them repeatedly to this day, this one only being the most recent listen. I do hope you will join me in contemplative worship of them.
posted by Jay H. at 9:13 AM