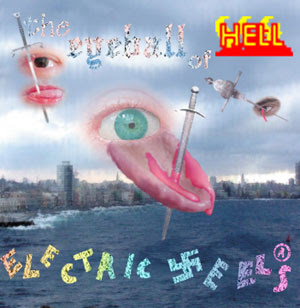 Back when the revelatory “Having A Philosophical Investigation With The Electric Eels” LP came out in 1989, I and many others were so overjoyed to hear the lost recordings of the incredible 1975-76 Cleveland proto-splatter-punk kingpins the ELECTRIC EELS that the notion that there might be more would have been too much to take at the time. Sure enough – a few years later Homestead put out the classy “God Says Fuck You” CD comp, tacking on a heaping pile of later-period experimental jazzbo Eels to compliment the rough and uber-raw guitar destroying Eels of “Agitated / Cyclotron” 45 fame (the second greatest 45 of all time, after Pere Ubu’s first, if you ask this guy). As Eels mania grew and then gelled, more killer stuff began to spill out that continued to add to the legend. A kind gentlemen soon sent me a murky tape of the band playing live both at a club and in their practice space, and there were outrageous songs so amazing that you couldn’t believe they hadn’t made it to vinyl yet, most notably the dirty retardo punk snarl of “You Crummy Fags”, and the band’s bizarre acapella cover of an orange juice commercial (“Roll On Big O”). Even that was soon rectified with the 3xEP “Those Were Different Times” collection, featuring another hot batch of archival Eels noise, including the aforementioned two tracks, along with great stuff from fellow travelers THE MIRRORS and THE STYRENES.

So when “The Eyeball of Hell” showed up in 2001, with even more unreleased Electric Eels snazz, the gods were truly smiling. Remember this is a band that never even put out a 45 in its lifetime, despite being perhaps the crudest exponent of BEEFHEART- and STOOGES-filtered garage art punk – and maybe one of the most ahead-of-their-time bands of their, uh, time. I was just stoked that the original version of “Agitated” finally made it to LP or CD, and that it was followed up by “Cyclotron” – just ear-shattering, stumbling, basement genius, with more fuck-off moxie and balls than any of the hallowed class of 1977. There was some previously-unheard stuff that blew me away, too – like the frantic “Zoot Zoot” and “Dolly Boy”, as well as their take on “Dead Man’s Curve”, which vocalist Dave E. just owns with one of the most ludicrously over-the-top performances of all time. The CD also tacks on some of the band’s classics like “Anxiety”, “Jaguar Ride”, “Cold Meat”, the ominous death-dirge "Natural Situation", and fine alternate versions of “Refrigerator”, “Bunnies” and “Spin Age Blasters”. And since we’re being honest here, let’s call attention to the numbers that prove the bottom of the trough was finally being scraped – misformed pseudo-experimental tracks like “Girl”, “IQ 301-Man” and “Jazz Is (Part 2)” are a tough listen no matter how big a fan one is of the other stuff. Let that in no way dissuade you from immediate purchase of this one, though – in fact, given the complete unavailability of the other ones, this is likely the one you’re going to find if you’re ready to dive into the single best example of pre-punk era unearthings, SIMPLY SAUCER notwithstanding.
posted by Jay H. at 8:49 AM