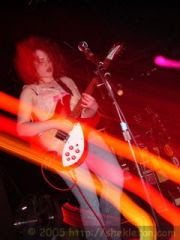 Folks have been telling me for years now how amazing THE HUNCHES are live, and I will say this for ‘em: they’re solid. Solid in the sense that when the ass-tight rhythm section & freakout guitarist are cooking up a head of steam, their sound is as thunderous & raw as it is on their records. In fact the ham-handed melodic stuff that sort of mars their albums comes off much more steamrolling live, and I think it’s because this band are practically olde-timers (like four years and going!) by the standard of modern garage punk acts. That guitarist was really something else. I was warned about the singer’s flop-on-the-floor, look-at-me-I’m-a-stumblebum act and how, um, “disappointing” it would be, and let’s just say I was disappointed as warned. Some people just have a greater need for validation that others. I swear he couldn’t have pulled off a better John Brannon circa ’88 look and shredded-vocal sound if he’d tried. No, of course he’s not apeing Brannon, you guys, don’t be silly. Like I said, solid. I think they’ve got a few tricks left. MISS ALEX WHITE (not sure if it was “The Red Orchestra” backing her up live) put out one of my favorite records of 2005, and on the evidence this evening, she’s going to be a favorite rock & roll mindblower for years to come. She blew in from Chicago with an armload of excellent gassed-up Ameripunk, both from her album & thereon – the new stuff I didn’t recognize was just great & will hopefully find its way to vinyl shortly. White & her band played a loose & rough version of Los Angeles punk circa 1977-79, cut with a pinch of girl-group harmonies and some tuff leather-rawk every now & again. A winning combination no matter how it’s diced. I guess I didn’t expect it to be as good as the record, and it was better. Now that’s a fine night out.
posted by Jay H. at 8:07 AM