TEX AND THE HORSEHEADS, RECONSIDERED...... 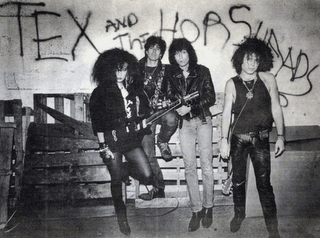 When I was a young lad playing punk rock music on college radio, one of the hot Southern California acts of the day were TEX AND THE HORSEHEADS. A bunch of my pals who were into The Flesh Eaters, Green on Red and the Gun Club loved 'em, likely because they gave off much of the same reckless, hard knocks, let's-drink-ourselves-stupid vibe. Me, I never really got into them. I always thought singer Texacala Jones was forcing a stupido slurred hick/banshee accent into every word she spat out, and maybe at the time there was a little too much "cowpunk" going around for my tastes. But then someone upped & digitized their first 2 records for me, and now I'm sort of on board with the Horseheads again. The first self-titled one came out in 1984, and wonder of wonders, I detect a distinct "paisley" vibe in Mike Martt's guitar playing, which makes perfect sense when you figure the hot denizens of LA nightlife just shortly before that were bands milking much the same sound. The songs are pretty good, though, and Tex isn't nearly as annoying as I remembered. This record's got a real rough, bottom-feeding country-tonk sound for the most part, and tracks like "Short Train" do them justice and sound like a cool little brother band to the GUN CLUB.

The second one, "Life's So Cool" from '85, was the one everyone was going nutzoid for back in the day. It's a pretty wild ride - no doubt about it, this band who sang about drinking and drugs in nearly every song weren't dillitante-ing around - they lived it, and you can hear it in the songs, which often sound like a broken bottle going up and down the strings & a lushy frontwoman falling all over herself. "I'll Quit Tomorrow" just might be my favorite drinking song ever. Production was clean, though, and that maybe keeps it from being the over-the-top barnburner you'd want it to be ("Hidden By Hills" and "Bartender Sam" are smoking, though). Seems the band was a little too long on image and short on chops, but hell, I know if they were opening for someone now (they're back together!) I'd probably go if only to hear a few of the better tunes and see what 25+ years of alcohol abuse looks like. If you get a gander at either of these in the used bins under six bucks, give it a go.
posted by Jay H. at 9:01 AM