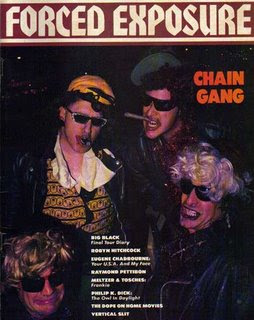 Like you, I like to think of myself as having halfway decent taste in music. I have cultivated said taste over the past thirty-plus years, starting with my religious devotion starting in 1975 at Age 8 documenting & rating every song in Casey Kasem's "American Top 40" countdown (first #1 I ever rated was The Eagles' "New Kid In Town" - I didn't like it). But when I look at how I came to appreciate the nooks & crannies of American & World sub-underground rock music, and what those trigger events were that got me to the music-obsessed freak I am today, I can enumerate roughly five key events:

5. Tuning into a great college radio station (KFJC) for the first time in 1980 and hearing punk rock and burgeoning English post-punk - and liking it

3. Getting dropped off on Berkeley's Telegraph Avenue by my grandparents for 5-6 hours at a time in 1981-84, and spending all of that time looking at & gobbling up 45s and LPs at amazing stores like Rasputin's, Universal, Rather Ripped, Leopold's and even Tower Records

2. Having a clued-in cousin living in the same town as me when I went off to college in 1985, who played me my very first tastes of the Dangerhouse bands, the Flesh Eaters, the Germs and others too numerous to mention

and #1. Finding a copy of FORCED EXPOSURE #10 (the one with Lydia Lunch on the cover) at Rockpile Records in Goleta, CA, and learning just how extensive and inventive the American independent music scene was, while also learning some critical filtering techniques to separate the good from the crap.

During the 1980s I read every Forced Exposure magazine that came out with such a slavish devotion that it practically helped create the record collection that I have to this day. What I loved & still love about it was that it was the most accurate "consumer's guide" I'd ever read, in the sense that if Jimmy Johnson and especially if Byron Coley said it was good, it almost always was. That to me has always been the litmus test for a good fanzine, and in 2006, for a good blog. I've always admired those who were trustworthy gatekeepers, if you will, and there's no doubt this magazine helped me want to atempt to be one myself. I also thought, at age 18, the way Jimmy & Byron snottily but cleverly dismissed halfwits like Jello Biafra was unlike anything I'd ever seen from the mainstream press to that time, and those guys helped to give me more perspective about underground music than anyone else, ever, including items #2-5 in my list above.

I can also now take a look at those magazines from 15-20 years ago, and see that there was a sufficient amount of BS in their pages. In the coming months, I'm going to periodically review & explore each of the Forced Exposure magazines I own, which is all of them starting with #6 pictured above, and give some perspective on why this particular magazine was a treasured jumping-off point for so many of us. I'll also take my trusted sword to the things about it that are patently ridiculous today. I guess my goal is to generate enough excitement about this lost resource so that someone does the right thing and compiles them all into a book or a series of books, much like what Re/Search press did with the SEARCH & DESTROY magazines from the first wave of punk. Stay tuned - the first installment in this fascinating and life-changing series is only days away.
posted by Jay H. at 8:46 AM