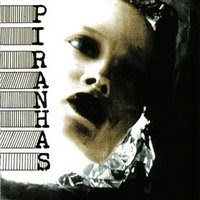 Back in early 2003 I panned what I thought was the debut CD from Detroit’s PIRANHAS, saying all manner of negative things about their overblown moves & their shticky pretend-panic style. I heard a few things from them in the intervening three years that threatened to shift my mindset, but the bitter truth held firm. Then, in one week, I got a CD-R in the mail from an individual “closely associated” with the band that featured their first 45 and 12”EP, and then four days later, this CD arrived in the mail from our friends at ON/ON SWITCH, a San Francisco label. The CD pretty exactly replicates the CD-R I received four days earlier. If this wasn’t enough to convince me that The Piranhas weren’t a totally on-fire carnival punk rock monster at one time (that time being 1999-2001), I don’t know what can. Every last track on here pounds like some wicked stepchild of THE SCREAMERS and (dare I say it) THE DICKIES, but without the cartoonishness of either. “Piranhas Attack” and “Future Primitive” from their EP are amazing Stoogeoid/Ubu-like gems that are as wild and frothing as anything served up by like minds The Hunches or Human Eye, and with this weirdo synthesizer action that really adds some brutal punch. Seriously, this brief CD, which I’ve played like a dozen times this week alone, is one of the touchstones of American rock lunacy this century. I am now a fervent convert. And get this - it's 5 bucks when ordered directly from the label. These guys must’ve been something special live around this time, and I’m bummed it took me until 2006 to get wise to their charms.
posted by Jay H. at 8:21 AM