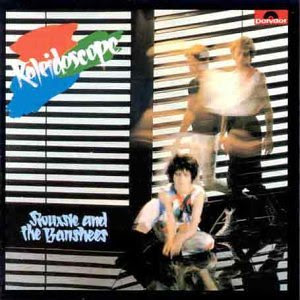 Oh you just go ahead and laugh, you. But I’ll still make the case that this era (1980-81) of SIOUXSIE AND THE BANSHEES are severely underrated among the post-punk cognoscenti, particularly this record and “Juju”, both of which recently came out in deluxe, remastered CD editions brimming with extra tracks. In the early 80s, when I was a tot, the Banshees were one of my favorite bands, but I totally forsook them once I reached college & never looked back until just these past couple of years. There were certainly good reasons for that – first of all, when I finally saw them live in 1985, they were godawful. This was around the time they were trying to “break” America, and their big alterna-hit was called “Cities In Dust”, a disco song that has none of “Kaleidoscope”’s dense, watery guitar, weird time sequences nor generally bleak sound. Siouxsie herself gave one of the worst I-wish-I-was-anywhere-but-here stage performances I’ve ever seen, and by that time I’d lost any enthusiasm I’d had for the band anyway. Too bad, too, because in my youth their B-sides and album tracks were all over my favorite college radio station, and one standout track in particular, “Trophy”, hooked me onto them big time. My high school friend Brian and I started religiously buying bootlegs around that time, usually CRAMPS and Siouxsie stuff. (Actually we had a pretty good deal from my perspective – he’d actually pay for the pricey bootlegs themselves, and then make me tapes of them). Why was it that two dudes were into Siouxsie together?? Lame. Where were all the white-skinned, black-stockinged goth hotties looking to party with us? Not at our school, unfortunately. Brian later moved to New Orleans, and just recently reported that he lost pretty much all his vinyl – including all those accumulated bootlegs – in Hurricane Katrina flooding. The horror! I mean losing your life is one thing, but losing all your records???

Back to “Kaleidoscope”. If you’re skeptical, and I’ll bet you are, find a way to download the track “Trophy”. If you’re surprised at how well this stacks up against your 1980-82 UK post-punk favorites, well, join the club – my recent listens through this remastered CD are doing the same for me. This record’s by no means perfect and suffers at times from slides into weak-kneed, dirgy “new wave” territory (“Lunar Camel”, “Desert Kisses”), but it’s more right than wrong by a mile. Not just “Trophy”, but how about the dark, melodic UK Top 40 hit “Happy House”? It certainly speaks to a different age when a glassy-eyed strange pop song like this (with odd-time drum signatures) makes the charts, and it’s a terrific song to boot. “Christine”, the album’s other hit, is definitely the most mersh thing on here, but I’ve found it hard to dismiss this great song for 25 years – I’m not about to start now. The other big winner is the minimalist electro of “Red Light”, even with the cliché camera shutter sounds. The thing that I like best about the record is guitarist John McGeoch’s distinctive sound, a murky but very hard and aggressive guitar sound that is totally his own – the only time I’ve ever heard it copied successfully is on GIRLS AT OUR BEST’s “Warm Girls”, which is almost a carbon copy of a “Kaleidoscope”-era Banshees song. The CD’s extras are OK – several demos from two different sessions (some appear to just be Siouxsie, a guitar, and a synthesized drum track), as well as their 45 “Israel”, a song that sounds sorta dumb to my ears in 2006. But the remastering job is first-rate, and the CD’s songs just leap right out, sounding like something recorded with today’s technology rather than a generation ago’s. I’m laying my cards on the table and recommending this one to you, with bells on. My only question is will you stop visiting this site as a result?
posted by Jay H. at 8:22 AM