THE BAGS : “DISCO’S DEAD” 7”EP….One of the hottest early punk rock bands of all time is surely LA’s BAGS, with a four song track record that pretty much beats any other ’77-’79 band not named CRIME's four songs hands down. (For the record, they are “Survive”, “Babylonian Gorgon”, “We Don’t Need The English” and “We Will Bury You”, not even an A- among them). I’ve been agitating for years to just about anyone who’ll listen of the necessity – nay, the duty – of cobbling together every recorded gasp and utterance of The Bags and making it available to the hoi polloi. In fact, in my frustration I once toyed with the idea of tracking Alice & Pat Bag down and doing it myself. That’s why hearing this sub-mediocre material from punk revival label Artifix is such a big-ass letdown – my bubble’s been burst; could it be that there may not have been much beyond those 4 screamers to begin with? (actually I know that to be false, as any viewer of “The Alice Bag Band” in The Decline or any listener to the powerful 1978 live tracks on “Live at The Masque, Vol. 1” can attest).

The 1979 studio demo “Disco’s Dead” is very tepid chant-along lunkheadedness: “Disco’s dead, long live rock and roll!”. Yeah, right fuckin’ on. No razor-wire “Babylonian Gorgon”-style attack here or off-the-charts wacked Craig Lee guitar solo; just a plodding & muddy demo that someone rightfully kept in a tape box for 24 years. OK, then what about the ’78-79 live tracks on the flip? Aside from being 20,000 leagues under the sea fidelity-wise, I guess they’re OK, but I’d sure hate this to be my starting point for one of punk’s genius first-wave bands. You kids that haven’t been scared off by the RIAA yet, get thyself to Kazaa and start those engines – or better yet, buy the Dangerhouse 1 & 2 LPs or CDs. There’s gold in them thar hills! 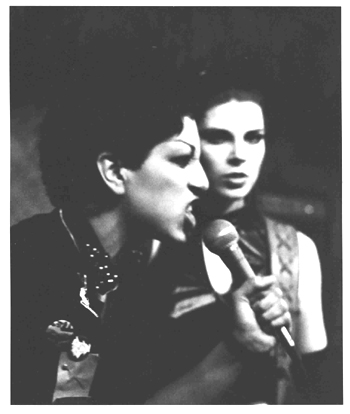