RAISING THE FLAG AND SAVING THE KITTIES…. 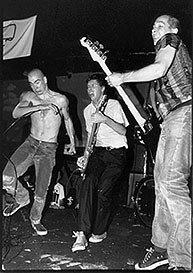 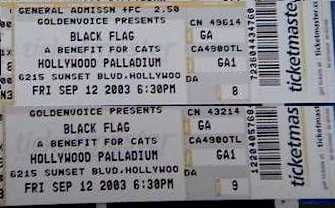 I wasn’t sure if the rumors of a BLACK FLAG reunion in September in LA were true until I did a little undercover sleuthing on “the web”. I was skeptical not just because the rumor was totally implausible: Keith Morris, Ron Reyes, fuckin’ Dez Cadena and (maybe) Henry Rollins all singing tracks from “The First Four Years” (I know those guys all have varying degrees of antipathy toward GINN), but also because it was said that all proceeds were going to “cat rescue organizations”. Get out of here!! What?!? What about Citizens United Against Police Brutality? Or Rock Against Reagan?? Well, turns out it’s on, September 12th and 13th at the Hollywood Palladium, sight of several legendary Black Flag shows back in the day, but I’m not really sure who is actually involved in the proceedings. Are we talking Robo and Chavo? Or some awful “In My Head”-era line up? And what if Ginn insists on sprinkling in some TOM TROCOLLI’S DOG or OCTOBER FACTION numbers? Are they going to let Danzig or Barry Henssler up on stage for an encore? If anyone out there goes to these shows, I’d love to get a full scene report e-mailed to me – I’ll post it right away.