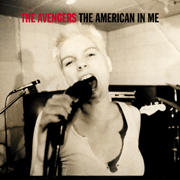 THE AVENGERS rank as a just-below-top-tier 1977-79 Califonia punk band for me: possessing at least three blowout Crime- or Weirdos-level tracks (“The American In Me”, “White Nigger” and “Uh Oh”, all of which ended up on the same four-song EP), and strictly second-tier (but still quite good) punk beyond those bombs. They were definitely one of the first punk bands I ever truly liked, and it’s been a shame that so much of their better material has been unavailable for years. This very new release “The American In Me” goes about halfway in connecting the dots, bringing forth four well-recorded 1978 demos that are all first rate, and could have easily stood as 45rpm A-side releases on their own – particularly an almost pop, less raw version of their only 45 “We Are The One” that’s got Penelope Houston harmonizing with herself. “White Nigger” and “Uh-Oh” make an appearance as alternate versions of the Steve Jones-produced tracks on that great White Noise 12”EP. Why those songs still aren’t available beyond that way-rare EP is a mystery for the great punk rock seers to pontificate upon. The bulk of this short 12-song CD comes from the band’s third-to-last live gig at the Old Waldorf in San Francisco, 1979. It’s recorded really, really, well – King Biscuit Flour Hour well. But the band sound lackadaisical and tired on at least half the numbers (the other half being to the standard you'd expect), and their then-new songs really hint at a mid-tempo, 4-minute+ direction that might've sullied their reputation a bit. So I reckon packing it in at this point was a bold career move that ultimately paid off. Nice work, gang. Oh, and contra a post I did a couple weeks ago, “Danny Furious” was the band’s drummer, not guitarist (I was upbraided by Penelope Houston herself). Not a bad punk rock name – still nowhere near as tuff as New Zealand’s “Mike Lesbian”, though.