THE KINKS : “ARTHUR, OR THE DECLINE AND FALL OF THE BRITISH EMPIRE” LP..... 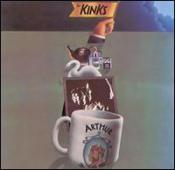 You know how some folks are Beatles people, Stones people or SWA people? Every now & again you’ll actually meet a KINKS person, and wonder where in the world they came from. After truly hearing (with open ears) some of the band’s late-60s stuff for the first time (!), I think I’m really beginning to understand them. 1969’s “Arthur, Or the Decline and Fall of the British Empire” is the great score to a TV musical that never got made – how about that? It features at least three absolute classic tracks, one of which (the operatic and soaring working-class tale “Shangri-La”) I can’t believe I’m just now hearing. It’s a full-on pop masterpiece. The others are the rollicking semi-hit “Victoria” and the brassy anti-war anthem “Yes Sir/No Sir”. But it’s not just these three – the whole record, which veers stylistically all over the place from garage-infused rock to proto-jams to Beatles-esque loopiness -- is a coherent, logical period piece, as quintessentially English as one could imagine, and one of the best post-British invasion records I’ve heard by the original wave. It spills over with a fountainhead of ideas and tons of crazy melodies, and somehow finds a way to knock out twelve very solid tunes. If it’s a “concept record”, well, I tip my cap because I sure can’t hear much conceptual action beyond a few consistent lyrical themes.

These then-twentysomething Brits, likely born in Mr. Churchill’s time, had a real hang-up about war in general, particularly World War II, which surely did a number on the Davies brothers (as it would you if your earliest memories were of hunkering down in a basement). Other Brit-isms are the class-based navel-gazing that the Sceptered Isle has long indulged in, as well as a dose of rambunctious Basil Faulty-like silliness (“She’s Bought a Hat Like Princess Marina”) that I can go either way on. Overall, it’s really a blast, with terrific through-the-roof LOUD production. It’s really one of those records I’m going to probably play frequently and not file away & forget like so many others – even 60s British stuff I really enjoy such as The Troggs or John’s Children or The Birds or even The Creation can only be spun so many times before repetitive stress injuries ensue, you know what I’m saying? This record, like so many of the Stones records of the same era, is for the ages. If you prefer a splash of Earl Grey over a Jasmine Mint or some Throat Coat, this fine, deeply layered record will surely please your distinguished, rocking, Anglophonic palate.