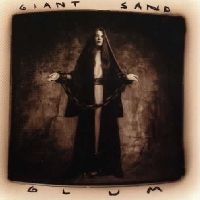 It was about 11-12 years ago when I became deeply entangled with the music of the then-California High Desert-based (by way of Tucson) GIANT SAND, and bought pretty much their entire back catalog in one fell swoop. I’d seen the band play once before, in 1987 in Los Angeles – they were still in their Dylan-of-the-desert stage best heard on the 1986 LP “Ballad Of A Thin Line Man”, and actually blew me away with a great keyboard-drenched set of country-based troubadour blues, similar to their pals GREEN ON RED (whose Chris Cacavas was conveniently guesting on keyboards that evening). But an ill-fated purchase of their next record, 1988’s “The Love Songs”, soured me on the band for a couple of years – right around this time Howe Gelb & co. were veering into an experimental black hole of their own making, taking a blender to traditional American roots music and creating something full of quick edits, abrupt shifts in direction, random noise and/or talking, and lyrics that made sense to no one but themselves & the man on the moon. They kept getting big props in the fanzines of the day, but I couldn’t crack the new code.

That was the case until I heard 1992’s “Center Of The Universe” and became re-engaged in a big way. While Giant Sand retained a lot of the weird surprises of the intervening years, in which a song could be an explosive 30-second shitstorm or a beautiful folk-tinged pop song, the songcraft was at its peak during their 1991-94 glory years. Gelb’s mumbly vocal style and cryptic lyrics gave him a certain stature as a true, bent original, and the much-heralded Convertino/Burns rhythm section were helping him crank out some really terrific songs. They were like this weird, desert-based communal family, with members that floated in and out (Paula Jean Brown, Gelb’s wife and then ex-wife, made regular appearances) & special guests like Gelb’s 6-year-old daughter or an ancient old desert sage that Gelb met in a bar (Pappy something-or-other, who is in full force on 1991’s “Ramp”). To this day “Center of the Universe” remains my third favorite of the three CDs of theirs I’ve held onto into the 21st century. The real killer, the one I still listen to all the time, is 1994’s major label debut (and not at all coincidentally, their final major label record), “Glum”. This is where it all came together: slithering, eerie folk songs full of danger (“Happenstance” and “Glum”); know-it-all travelogues (“Frontage Road”), NEIL YOUNG-style erupto-metal, and the usual detours deep into Howe Gelb’s cranium, this time a journey well worth taking.

My problem with the band not long after this one was that everything was being recorded and nothing was being tossed, no matter how jammy or boring. Gelb’s unharnessed creativity led him to put out just about everything he did, and I was gobbling it all. I finally had to filter the band’s accumulated catalog into those three essential CDs: “Ramp”, “Center of the Universe” and “Glum” (I dipped a toe back in a few years ago when “Chore of Enchantment” came out and didn’t like it). Talk to people these days about Giant Sand and you’re usually going to get a frothingly positive response or a big fat “they suck”. I’m trying to take a nuanced middle path here, and recommend checking out those 3 if you’re still a bit dubious – and keeping your distance from the remainder.