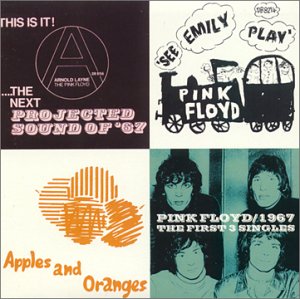 Among my favorite collections ever is this very brief six-song CD-EP containing PINK FLOYD’s first three singles, all from 1967: “Arnold Layne / Candy and a Currant Bun”, the incredible “See Emily Play / The Scarecrow”, and the less heralded but still worthy “Apples and Oranges / Paint Box” 45. Contrary to what many who’ve been subjected to untold years of SYD BARRETT worship may think, I almost feel that there still needs to be a full accounting of the man’s songwriting genius, and a definitive 2xCD collection of his top moments. That would include every track on this EP, the searing rocker “Vegetable Man”, about half of the first Pink Floyd album, rare bootleg-only tracks like “Birdy Hop”, and large chunks from his solo records. Yet this one is the guy’s (and the band’s) hands-down masterwork. “Arnold Layne”, a bizarre hit 45 about a convicted laundry-stealing crossdresser, cemented the band’s early template as a dark, addled, space-& time-traveling force to be reckoned with, whereas its flip revealed the jaunty & tripped-out world of Syd Barrett front and center. “See Emily Play” is only one of the greatest 3-5 rock and roll songs of all time – one guy called it “...a near-operatic, soaring, experimental psychedelic pop monster”. Buy that man a beer. It took me far longer to hear it on “classic rock” radio than any of the band’s early 70s megastadium anthems, which is a crime. A crime! The other three tracks are varying shades of genius, creatively wacked, ultra-intense "free form pop", none of which sound a whole lot like anything that made it to the debut album. For some reason getting all that early stuff together in a coherent package has been elusive, outside of this release, bootlegs, and things buried deep within box sets. It sure makes a homeboy wonder, doesn't it?