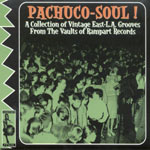 I feel like I’ve been cranking out all sorts of mealy-mouthed reviews lately in which I praise a given band or release’s few high points and pointedly dismiss the rest. This review is no different. “Pachuco-Soul!” is a collection of 1960s/70s soul/R&B 45s from East Los Angeles, or more accurately, from Eddie Davis’s Rampart Records, known as “the Motown of the California Chicanos”. So does that mean that this is chock-full of banda-like accordian, lots of fake crying and “ahhhh-ha-ha-ha-ha”s, and “low rider”-esque percussion? Nope, not at all – if you tried to play guess-the-ethnicity on this platter you’d have 9 out of 10 doctors guessing “African-American”. This is-no-doubt-about-it soul music, folks, and the content of its character overrides the color of its skin on just about every track.

Of those tracks, the big one, and only one I’ve heard before, is CANNIBAL & THE HEADHUNTERS’ “Land of 1000 Dances” – and if that were it, there’d be no reason to read any further. But I found three knockouts that I’ve been playing over and over, especially a heavy riff-tastic, horn-led stomper called “I’m In Love With Your Daughter” by THEE ENCHANTMENTS – wow. This riff will not leave your head for days, enough so that you’ll forget that the guy’s vocals are pretty unexceptional. Put this backing section behind a Screamin’ Joe Neal or even Gerry Roslie and you’ve got a hothouse, sweat-soaked track for the ages. My other discoveries are a goofy, frantic instrumental called “Chew Chew Chaw” by SHORTY & ENCHATING SOULS and a soul smoker from THE ATLANTICS called “Beaver Shot” (complete with porn-snapping camera noises that liikely went right over the head of 99% of the listening audience). The rest of the compilation ranges from pretty neat to supremely frustrating. Scattered among the decent soul/funk workouts is some of the worst Teddy Pendergrass-eque lite soul/MOR you’re gonna hear anywhere, which is sort of baffling given the “teen dance”-invoking packaging and cover shot, yet thoroughly in keeping with the high highs and low lows of most 60s label retrospectives. Your CD player’s skip function will really come in handy, but don’t give up the ghost too early because the real good ones are scattered all over the 30 tracks here. Thanks to TA for helping me find them.