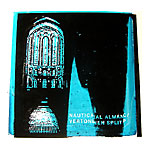 It’s funny, you have to think that when someone takes the time and spends the postage to send you a fancy-looking, limited edition LP of shapeless noise, after reading a post mercilessly belittling one of the very bands on the record, there’s probably someone pulling some old-school reverse psychology mojo on you. It’s a cool gambit, playing up the relative squareness of hopelessly rockist dorks like myself while the noise nation clucks and winks in unison as another of their heroes are taken down & therefore elevated. Why, NAUTICAL ALMANAC themselves, bless their little hearts, have posted a review I wrote on their recent CD on their web site, with nary a shred of bitterness or rancor. If they can be that evenhanded and forgiving, well, why can’t I? OK, so now that one of the label heads at the C.I.P./SNSE labels has encouraged me to give the NAUTICAL ALMANAC / VERTONEN split LP a college try, I say, “thank you sir, and please bring it on!”.

The record itself is neat – the cover is hand-silkscreened! I don’t know if the record itself is “lathe cut”, but then I don’t know what that means. Looks like a vinyl record to me! Nautical Almanac’s side, I’m afraid to say, is masturbatory twaddle so ridiculously random and contemptuous of its audience that it’s really, really hard to take seriously. I know it’s being created with love and joy and peace and is all about opening up a radical, revolutionary new paradigm, but I have to think that there’s still a joke being played on someone. I’m just not sure who. It might be me. Don’t know how VERTONEN rock the fuckin’ house down more than their pals Nautical Almanac, but somehow their nonsensical noise stands up just a little straighter and is a little less light in the loafers, if you know what I’m saying. Their side’s got a sample of some olde tyme piano rag that cuts in & out and loops back upon itself for a couple of minutes. Neat! Eminently listenable! How about that?