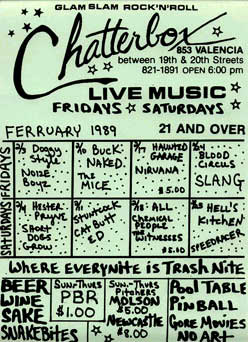 Had run up a nice credit receipt at the local record store last week and decided to plunk down some of that pretend money on this memoir, which has now been out about a year. My wife thumbed through the photos of various Motorhead-t-shirt-wearing heshers and crazy metalhead alcoholics and said, "Uh, this doesn't really seem like a scene you'd have been a part of". And she's right, up to a point, but not only was THE CHATTERBOX one of the early clubs that looked the other way when I nervously showed up with my horrible fake ID (thank you, Kevin Jay Harris, who looked nothing like me, for turning over your driver's license to me when you turned 21!), their heyday was right smack in the middle of another heyday I like to call "long-haired punk" . Long-haired punk didn't necessarily have to involve long hair, but it DID have to involve a fondness for the few metal bands worth paying attention to, a reverence for the harder-edged punk rock of the late 70s/early 80s (especially hardcore), a tolerance for glam-era posing and strutting (within reason -- cross that Stones/Dolls line and all of a sudden it's Sunset Strip shit rock), and a healthy liver and attitude that proclaimed "Every day is an Alcoholiday!". This was the Chatterbox's home crowd & entire reason for being, and in 1986-90, it was a place I liked to call "home for the evening" every now and again.

Skirting this metal-tinged 80s scene were incredible punk-based groups like THE DWARVES and the LAZY COWGIRLS, both of whom I saw multiple times at this club, and of course all the popularly-known "grunge" bands, including GREEN RIVER (who played here) and NIRVANA (who were supposed to play here but begged off at the last minute). Most of the bands that played this club were shit on toast, and deserve to be long forgotten. I had to close the book and pull the covers over my head when I saw the names (and pictures!) of the following blood-curdlers: The Gargoyles, Hemi, Screaming Bloody Marys, Celebrity Skin (with Don Bolles! Killing the good name of The Germs!! I fuckin' saw them!!!), Jackson Saints, Touch Me Hooker, Samiam, Papa Wheelie, and far too many more bands that I wasted way too much time watching, not all at this club. Maybe the most representative band of all the crap Chatterbox bands, a band who bring a smile to my face even now when I think about them, was San Francisco's VERBAL ABUSE. Anyone remember "VA Rocks Your Liver!"?? Yeaaaah! Glam slam alcoholic party rock. I saw them -- PAID to see them. Times sure were different then.

In any event, Alfie Kulzick, who founded, owned and operated the bar, put together her scrapbook of photos and flyers and added a little text around the edges to flesh out the times. It's the sort of thing that 99.9% of the people who might read this site will find 100% uninteresting, either due to your lack of proximity to the proceedings or due to the mindlessness and mostly bad rock of the Chatterbox "scene". It's so thin on text that it might just merit a nice 20-minute "flip-through" at your local hipster small-press bookstore. But she captures the time in such a way that I admire her approach. I swear it seems like a hundred years ago. As she puts it in the intro,

"It was a time when crack and guns were just beginning to infiltrate the housing projects and AIDS was just a 'gay disease'. Artists and musicians lived together in large flats and small warehouses throughout the city...very few, if any, musicians had cars - maybe the drummer had a van...".

And 14 years later, you can't find anyone that looks like this in San Francisco any longer, except perhaps in the dark alleys off Haight Street. The city's gone from being an unsafe hell in a handbasket during the Chatterbox's time to being the upscale latte liberal's city of choice today. Having lived in and enjoyed both San Franciscos, this book was a semi-nostalgic reminder of the one that's gone, even if I'd never in a million years set foot in that club if I wasn't 19 years old, music-crazy, and very, very thirsty.