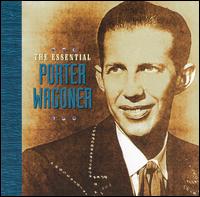 Fans of 1950s-60s barstool Country and bloodthirsty revenge-on-cheatin' wives Western have long held PORTER WAGONER as an existential hero, as the guy had a track record of down-and-outer "story songs" that nearly beat all comers and peers (JOHNNY PAYCHECK and MERLE HAGGARD excepted). I've loved the classic murder ballad "The Cold Hard Facts of Life" for years, but did you know that Wagoner is also the guy responsible for the incredible, so-cornball-it-has-to-be-real "What Would You Do (If Jesus Came to Your House)"? Right, the song that was on one of those "Wavy Gravy" novelty compilations years ago, a song that posits that you'd have some real straightening up to do if the Holy Host actually dropped by with no warning. Out go the Hustlers, the bag of Munchos, the Electric Eels CD and the Horizontal Action 'zines. Waggoner had already thought this one through back in the 50s. Anyway, "The Essential Porter Wagoner" has instantly become one of my favorite "greatest hits" country collections. It's a gavel-to-gavel overview of his career, from his Hank Williams-worshipping 50s material through his redneck 70s stuff, stopping for a long interlude in the 60s, when he was at the peak of his songwriting and singing powers. It skips all of his equally worthy duet material with DOLLY PARTON, but I encourage you to seek out that greatest hits CD as well. For drunk-lyric aficionados, you can't do much better than a single line from "Sorrow On The Rocks": "...my eyes look like a road map of Georgia...". This track is near-perfect, as is "I'll Go Down Swinging", and both ended up among his biggest country radio hits. I'd never heard "Skid Row Joe" before, but it's a real great weeper, and it's hard to reconcile its huge popularity in 1965 with all the crazy rock and roll going down at the time. These Nashville and Bakersfield pioneers truly existed in a world unto themselves. There's a few weird ones, too, like "The Carroll County Accident" -- a mystery wrapped inside a riddle wrapped in an enigma! Ms. Parton shows up in the backing chorus of some of the later numbers -- there's certainly no mistaking that voice. I guess these two were a happening couple for a while -- Wagoner with his custom-tailored Nudie suit, Parton with her impressive hairdo & rack. Now that I've got this I can't imagine a truly representative country collection being without it, and I resolve to now dig deeper into Wagoner's catalog to see what other degenerate pleasures lie obscured.