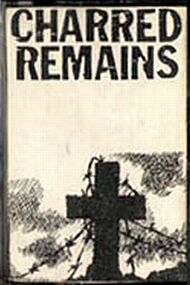 I used to buy Maximum Rock and Roll during hardcore punk's golden years (1981-83) and marveled at the huge array of "scenes" all over the USA and globe. It was almost downright hippie in the way loving attention was slathered on how "the kids" would organically come together in places like Milwaukee and Fresno to create awful punk music and fight the fuckin' pigs. All it took to file a scene report was to file one -- that is, write up what bands formed in your town, who was putting out 45s this month, which crazy punks got stinking drunk at which parties, detail any police harassment at the VA Hall and add a few parting words on how Reagan was about to murder us all, and your scene report was ready to go. Chequering all this exciting banter were cool advertisements for micro-releases from around the world. MRR kept their ad rates low enough that a 15-year-old kid with a pressing-of-200 45 could get out his glue sick and a thick pen and have a quick ad in there for maybe $10. It was just such an ad that I remember seeing for this 1981 cassette-only release called "CHARRED REMAINS", which (retrospectively) is sort of a who's-who of hardcore, both good and horrible. I'd never heard the tape until last week but had long wanted to, but noooo, I ordered the Wisconsin scene overview "America's Dairyland" tape instead back then. Someone threw a clean copy of this tape up on Soulseek and I pulled it down, making sure to earmark some royalties directly to SIN 34 and THE MISGUIDED, of course.

Based on what I could track down on the World Wide Web, this tape was put out by a guy named Bob Moore who ran a 'zine called NOISE and later a record label called Version Sound. DIE KREUZEN fans, of which I am a big one, will remember this label as the one behind the "Cows and Beer" 7"EP and subsequent "Master Tape" LP comp, which featured super lo-fi versions of the tracks that eventually made up the single greatest US hardcore punk album of all time, the self-titled debut Die Kreuzen record on Touch & Go. Their tracks are pretty much the best on "Charred Remains", but there are a few other corkers I'd never heard before. Best is "Crime Watch-Block Parents" by DOGS OF WAR, a real spinner from back in the days when crime was out of control in the US and each suburb had "block parents" that kids could run to if some vile creep offered them a ride. It's got great vocals and reminds me of a faster AUTHORITIES ("Radiation Masterbation" and "I Hate Cops" -- you know you love 'em). I'll still stand by LA's SIN 34 even though they've a longtime butt of wasn't-hardcore-awful jokes; they've got two relatively strong tracks on here, and another surprise was VIOLENT APATHY from the Midwest. You might know these strapping young fellas from "I Can't Take It" on the "Process of Elimination" EP (famous for also including Negative Approach, The Necros and The Fix), but they've got 3 red-blooded meathooks on this, served up fast-n-loud. There are also two from VOID, who just plain ruled (though their non-Dischord stuff like this is incredibly tame compared to their godhead side of the split LP). On the down side? Well, how about ARTICLES OF FAITH? What a crap band -- each track is way too long, too involved, too English to merit even a first listen. Ditto for the TOXIC REASONS, who were a living parody of a bunch of American kids trying to be Discharge or GBH, complete with horrendous British accent. Rounding out the pile are HUSKER DU (a track lifted from "Land Speed Record"), UXB, PERSONALITY CRISIS (Canadians! Guy had monstrous vocals here and elsewhere, but the band was pretty weak), Sacramento's REBEL TRUTH (horrid) and a handful of nonentities. A total nostalgia trip even if you weren't there (and I wasn't), yet one you might not ever want to listen to more than once a decade.