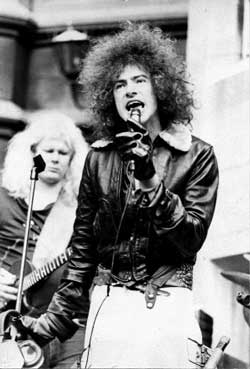 Another piece in the new issue of UGLY THINGS that got my mojo all hopped up was this Johan Kugleberg two-pager on "Primitive Shit Music". Kugelberg makes a well-argued case for creating a defined sub-genre of raw rock and roll called Primitive Shit Music, or PSM for short. As I understand it, PSM is the crudest, most willfully inept rock music of all time -- not necessarily "lo-fi" (though that helps), but in pure posession of a certain je ne sais quoi that renders its releases stark, beatifully raw and nakedly flailing and full of chaotic noise. He then lists 10 records, all 45s, that he feels are the high-water marks of the genre, but are far more likely records that he owns that he'd now like to rub in your face. I've never heard nine of the ten -- only the DISTORTED LEVELS have ever shown up in my collection, and the screaming Stoogified rawness of that record is a fine benchmark for the genre, lending the rest of his list some credibility:

So since the guy achieved his aim -- anyone know where we can find mp3s of this stuff? DEATH TRIP I remember from Bad Vugum's heydey, but I never bought that 45 and nestled with my LIIMANARINA instead. But the rest? I wanna hear 'em. Kugelberg then goes on to list ten "Pre-Punk Potentates of Primitive", containing some of the true masterpieces of 20th Century Popular Culture:

Finally, he goes on to to list another 20-25 records that fit into the genre, ranging from killers like the SOLGER EP to the FUCKIN' FLYIN' A-HEADS single to the "Weird Noise" EP and the like. Nice work. One horrible, dreadful ommission that I would've put at #2 on the list above is an incredible 1966 single from THE MODDS called "Leave My House". This made it to numerous bootlegs before settling on Crypt's "Teenage Shutdown: I'm Gonna Stay" CD a few years ago. It is everything you'd ever want in a PSM record: what sounds like an acre of fur on the needle, raw and fuzz-laden guitar, drums in a closet two rooms removed from the studio (studio??), misanthropic lyrics, and snotty-assed vocals. I'd call it "60s punk" but it really doesn't fit because it's so out of time and bizarre -- why, some might call it Primitive Shit Music!