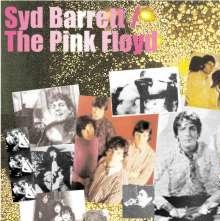 If someone pops off and tells you that there's no good 1967 PINK FLOYD/SYD bootlegs out there, like I almost did a few weeks ago, you can just tell that person to go and pound sand. Almost milliseconds after I wrote a review of the halfway-decent Floyd boot "Lost In Space", I received a telegram informing me of this free mega-volume series of CD-Rs put out by true public servants over "the Internet" called "Have You Got It Yet". At that time there were 10 CDs, just a few weeks ago I'm talking, and since then at least 9 (!) more have been added -- all prime-era "See Emily Play"/"Arnold Layne"/"Piper at the Gates of Dawn" Pink Floyd, with a ton of Syd studio and live oddities to match. It makes one marvel. Just a few years ago I was paying $25 for a single bootleg CD or LP; today I'm paying $0 for 10 CDs of the stuff, an embarrassment of riches so vast that I can't even listen to it all yet. In fact, of the 10 I've got, I've only explored #1 and #2. "Have You Got It Yet, Volume 1" is a real collector's trick bag, containing incredible finds like a 5-16-67 BBC version of "Astronomy Domine" that's just stunning warp-factor psychedelia, along with "acetate" versions of bent masterpieces like "Arnold Layne" and "Candy and a Currant Bun" (which sound like over-modulated, groove-bursting versions of the 45s). There are also radio show recordings that appear to have been recorded 20 feet from a transistor with a child's Fisher-Price tape machine, but there are completists and obsessive-compulsive archivists involved here, so let us not begrudge them their buried treasure. There's also a cool "stereo-enhanced" version of one of mankind's greatest rock and roll songs ever, "See Emily Play". I haven't heard the stereo version before, just the mono, you know what I'm saying? 4 big versions of "Interstellar Overdrive", too. And only 18 more volumes to tackle! We live in some pretty far-fuckin'-out times, hunh?