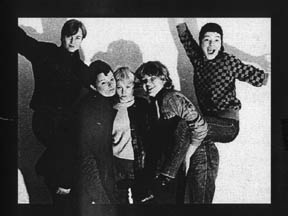 I missed the first wave of HYPED2DEATH CD releases and was altogether unaware of them until a pal roasted up everything that they'd put out up to that point, appx. late 2000. Those "Messthetics" CDs sent me reeling on a serious late 70s/early 80s English DIY bender for a couple of years (Animals & Men, Beyond The Implode, Desperate Bicycles, on and on); helped me go berzerk over some older US punk I'd never heard and didn't own (Rubber City Rebels, Vores, VKTMS), and introduced a whole new category of American 1975-83 underground classics on the "Homework" series (True Believers, Screaming Sneakers, Zoomers, X-X, Radio Free Europe, Stroke Band, tons more). Lost in all this running over of the cup were two worldwide punk CDs called -- wait for it -- "Planet Punk". I emailed Chuck Warner at Hyped2Death this week, and he tells me that he only put out CDs of #3 and #4, and #1 and #2 were cassette-only releases from the days when these things were used as advertisements for his retail catalog, not retail items in and of themselves. They're long gone now, I'm afraid. I pulled out my roast of #3 the other day and gave it a good twice-over. It's got some European punk curios you just have to hear to truly consider your life complete.

My key picks are a French synth-punk band called WARUM JOE from 1981 -- "Tchang" off the "Dans le Blizzard" EP is supercharged pogo-til-you-puke electro percussive punk, with an unyielding drum machine and upside-down riffage that's really something to behold. I need to know more about these guys, whom my French connection tells me are still active to this day (!). The other heavy hitter is "Intoxication" by RANCID X, who I believe are Italian & who would slot in nicely with the 1975 LA proto-punk contingent of The Dogs, Weasels, Imperial Dogs and their beer-besotted ilk. It's a real balls-out bruiser, but with killer hooks and a grinnin' vibe. For straight-up 1982 Italian 'core, it's hard to beat S.I.B., am I right? And even KLEENEX (pictured above) make an appearance, though it's with the ultra-repetitive "Hitch-Hike" that to these ears was a lesser moment in these Swiss chicks' fine oevre. Why do you think Chuck's keeping these Planet Punks away from the kids? It's miles better than most Bloodstains or KBDs that venture off of American shores and onto foreign lawns.