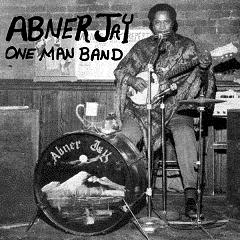 In the micro-underground world of one man bands, this guy's got to be one of the strangest I've come across. ABNER JAY spent a long life in music and minstrelry leading up to these early 70s Vietnam-era recordings, and an enterprising label called Subliminal Sounds found them & put them out to the public a couple years ago. I guess you'd call Jay a bluesman of sorts, since his songs and sermons usually deal with troubles & sorrows of various stripes. He's also got a deep-blues vocal delivery, and comes across as a real genuine, home-schooled itinerant character. Most of the tracks on here start as sermons of some kind or another, and often include horrid sexual puns ("What's six inches long and has two nuts on the end? An Almond Joy, silly"). Jay also has a real fascination with venereal disease, snorting cocaine and taking violent revenge on cheating women. When his moonbat tales of these matters are mixed with a minister's fire-and-brimstone delivery, it's pretty jarring. You're expecting a lecture but instead get some bizarre, ill-told tale. It's total vaudeville, but only rarely is it truly played for laughs. The songs that follow are OK, but Jay's a second-rate guitar plucker and vocalist, and doesn't have the depth of feeling or innate chops to play the sort of blues that'll win him kudos on those merits alone. He's an oddity, pure and simple. I might spin this at my next stag party, but otherwise will let this week's listenings take a long, looong time to settle.
posted by Jay H. at 9:43 AM