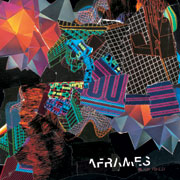 Officially "out" for all of three days now (no, not me -- the CD), I've been cozying up with the new A-FRAMES CD for a few weeks. It gets better every time I hear it, and confirms once again why this is one of the more exciting, slashing post-garage noise bands of our time. While the no-count pummeling continues, and the full-on Teutonic throb of these songs is ever present, "Black Forest" has moments of complexity and tonal expansiveness that weren't around on those first two LPs, and certainly not on the raw-ass 45s (I haven't yet heard the latest one on S-S but it's in my to-be-played hopper, ready to be heard and heartily opined on). I made my peace with the vocalist long ago, and realized that he's not Jeff Spicolli, but rather a very large man with a shiny pate and an empty, deadpan vocal style that's neither learned nor tamed. Real, in other words. He sings convincingly of post-apocalypse emptiness, absolute zero, nuclear fallout -- that sort of jumpin' jive. While it could come off as preposterous or just plain silly in lesser hands, the combination of these weary words and the icy mechanicalism of the music makes for a pretty smokin' bleak treat.

The hit is probably going to be the title track, if only because there are 2 versions of it on the disc -- one a carbon copy of the first, with an extra layer of noise caked on (this later, closing version is tip-top, and my current favorite on the CD). I suspect that "Experiment" and "Death Train" will also bring the punks and skins together (finally!), along with the new wavers and even the fuckin' mods. Even the weird paint-huffing kids will groove on moderately experimental, difficult numbers like "My Teacher", and with Sub Pop's distribution tentacles taking this band far beyond where they've been in the past, I suspect the A-Frames are going to be front & center on many a hipster's lips in 2005. I suppose they could have taken an easier route & put out something relatively easier to ingest for their big-indie debut, but they didn't. Three records, three winners -- get it while it's fresh & quivering.
posted by Jay H. at 10:30 AM