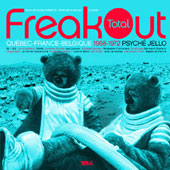 The collection brings together French underground pop/psych music that was ascendent as the Gallic sun was setting on the more brassy go-go sounds of the mid-60s. That ye-ye girl pop music is among my favorite genres of rock music of any era; this post-ye ye music (1968-73) is almost as interesting, if less fun. There's another similar collection sitting on a shelf at my house called "Wizz!", and obviously a couple more volumes in this series as well. "FREAKOUT TOTAL, VOL. 3" is compiled by a Montreal-based record fiend named Satan Belanger, and he focuses on the Francophone world both outside his door in Quebec, and over the Atlantic in France and Belgium. His best finds are two versions of a "Sing This All Together"-meets-Indian War Dance number by MADELEINE CHARTRAND called "Ani-Kuni", so good they put it on this comp twice. If you can keep this ultra-rhythmic psychedelic singalong out of your head the better part of a day, more power to you. STELLA, who winningly pops up on a couple of the Ultra Chicks/Swingin' Mademoiselle compilations, contributes a duff power track called "L'idole des jounes", whatever that means. Even the guys (CHRIS GALIBERT, JACQUES DENJEAN, more) sound good on this, and not an ADAMO track in the bunch. A recommended peek into a slice of pop music that evaporated for good by the mid 1970s.