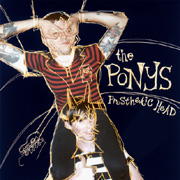 This quartet has all of a sudden turned into the discerning garage punk freak's pop band of choice, and little wonder with outtasite records like these. "Prosthetic Head" is the Chicago band's best single song to date, a really bouncy, keyboard-driven raver with hooks to hide a tank in. In fact the keyboards imbue this 45 with the spectre of THE CLEAN and other Flying Nun kindred spirits, and I'll bet if this were 1981 Auckland instead of 2004 Chicago, THE PONYS might be front & center on the FN lineup. Don't take that as a warning, punker -- this is still a guitar-drenched, fuzzy record, with those warbly, yowling vocals you've come to know & love and compare favorably to Richard Hell (as opposed to "Richard Hell"). The flip's a little heavier with more meat on its bones, but that A-side -- well, that's the sort of song 45s were meant for. Top pick for 2004, just nine weeks too late.
posted by Jay H. at 12:52 PM