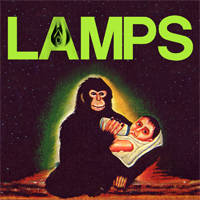 The best thing about this band so far is there's a dude named "Monty Buckles" in the group, which might be the single coolest rock and roll name since Rubin Fiberglass. But Mr. Buckles and his trio of slash-n-burn thug-garage pounders are also in good form on their debut LP, which has some real ugly charmers nestled amongst the standard and the true. I hear hints of In The Red stablemates the NECESSARY EVILS (who, in the end, kinda blew) and THE HORRORS (who I kinda like), but better than both. It could be those urgh-argh vocals, which are pissed-off and hoarse & which make the overall vibe a little tense and standoffish; maybe an acquired taste for those of you who are a bit "light in the loafers". I also take minor issue with the drumbeats on this, which seem to have an unvarying Gories-style pattern, like THE LAMPS were ultra-primitive juke joint drunks instead of a well-rehearsed hard-blues garage band. The tippy-tapping soft touch just doesn't match the roaring panic of the guitars. Yet it's pretty hard to touch the opening "Rototiller" or the Gun Club-reminiscent "Bertha Walt" for slamming, loud, melt-your-face-off rock music. With a few beers in ya and a 3am curfew, these guys could definitely be top-shelf entertainment. I intend to find out next time they bomb up the I-5 from Los Angeles to rock me. Not one half bad!
posted by Jay H. at 10:58 AM