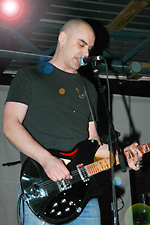 SIGHTINGS are unlike any band going, anywhere. This Brooklyn trio speak a musical foreign tongue formed at the intersection of improvisational soundscapes, balls-out rock and crude electronics held together by duct tape & baling wire. Emphasis on the electronics & effects, along with a big dose of spattering percussion. The drummer's kit is this weird half-analog, half-digital hydra; the bass sounds like it's going through 20 effects boxes and is on delay to boot, and the guitar itself is like a mushroom-fueled bad trip. If I had to split the SIGHTINGS cards between unplanned free-form experimentation and songs, they'd easily fall into the latter -- rehearsed, practiced, and planned, yet bizarre as fuck-all. Those songs don't remind me much of anyone else's. If this is indeed the sound of the 21st Century, we could do a hell of a lot worse. Crowd thought so too, & though they may have been here for the far more pedestrian sounds of the A-FRAMES, they hooted in all the right places.

I had to liberally check my pocketwatch while watching the A-FRAMES (picture above) to make sure I wasn't still standing at their May 8th, 2004 Hemlock Tavern show. The set, which was great, was nearly identical to the one rendered last time they were here. Same charge-ahead songs from their new CD "Black Forest", which were "in development" then, same hits from the past, even the exact same encore ("Radiation Generation" + the Aussie X's "Batman"). I get the feeling that these guys are comfortable right about here, in terms of popularity & audience growth -- enough to fill a hole-in-the-wall club with rowdy hipsters, yet also enough to sell merch by themselves in a dark corner, put 45s out on cool micro-underground labels like S-S & Dragnet, and play their new stuff louder, faster & more berzerk than the Sub Pop record songs. And drummer Lars Finberg is quite a stud pounder for a fairly compact young gentleman; he's also a prime mover behind fine Seattle bands THE INTELLIGENCE and THE DIPERS. Remember the name -- it's gonna be a big one someday. I'd gladly pay real cash money to see the same set again next May too, so let's plan on it, hunh?
posted by Jay H. at 7:01 PM