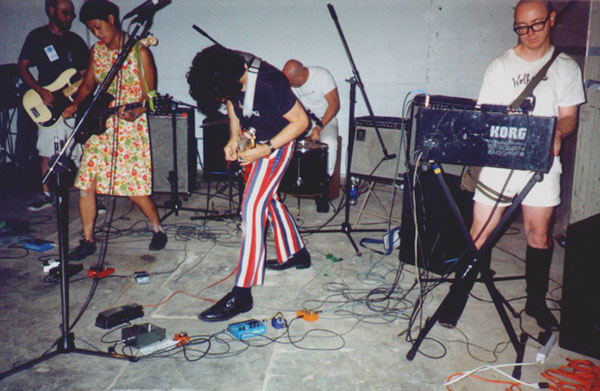 Perhaps 20 time-killing minutes before this show started, I spied a PLASTIC CRIMEWAVE SOUND (pictured above) CD in a record store bin with an attached written rant, comparing them to early MONSTER MAGNET, HAWKWIND, CHROME and all that. I’d taken a nonchalant attitude toward seeing the dreaded “opening band” but thenceforth decided to floor it to the club. Though I only saw the last two numbers, they were each about 10 minutes, and they were right fucking on. The last one, which was introduced as “our biker song”, was truly this frenzied Wild Angels fuzzathon that delivered as advertised. The drummer had this terrific, metronomic Krautrock style of pounding that worked perfectly as the feedback and howl swirled around him. And not only did the freakout guitarist have a killer pair of striped “Crazy World of Arthur Brown” pants, he was sporting some awesome 1973 mutton chops that really got the good times flowing. I’m sure not much of a “space rocker”, but this crew might have me slapping on my astronaut gear after the next show. I do know that they’re also fond of “the jamz” – and I’m not. They were selling some cool-looking homemade CD-Rs at the merch table and I asked the main guy to help me select one targeted at the non-pot smoker demographic. He didn’t have one; such a question did not compute. So I bought the one that looked the best, even though it touted a meaty batch of “boombox jams”. I’ll let you know, but in the meantime – Plastic Crimewave Sound!!!

I wish I could say the same for THE GRIS GRIS, a San Francisco band that trustworthy, well-informed, impeccably-tasted individuals have been telling me I need to see for a good year now. I thought they were a total snooze, outside of a couple of 1968 San Francisco Haight Street moves a la QUICKSILVER, JEFFERSON AIRPLANE, MOBY GRAPE that lent a noodly love-in vibe to the mistructured, meandering mumbling the Gris were serving up. Their disconnected, heavy art rock seemed headed in the right direction at times, but just when you'd be settling into something half-alright, the next coda in the song cycle would burst in and brutally snatch away any ill-gotten gains. Lots of faces scanned the crowd in sympathy, loads of slow strolls were taken to the bar, lots of sullen, defeated slouching proceeded toward the outside patio. Not a lot of rocking going on. These are the guys far better suited to have all the way from come from Chicago to bore a crowd of hipsters, not the other two bands. THE PONYS were rock-solid entertainment, a firing-on-all-cylinders band who will be leaping about in stadiums a year from now – maybe not as headliners themselves, but opening for The Pixies or Sonic Youth, no problem. I’m not yet fully sold on their new CD outside of a couple tracks that the girl sings + one great bouncy number called “Today” that they ripped through tonight, but live they were just bang-bang-bang tight and a lot of fun. I peg them in their 2005 incarnation as a garage punk/60s pop-tinged version of The Breeders -- and hey, I always sort of liked The Breeders. Alternative Rock of the ‘00’s! A roller coaster of a night out with some refreshing new discoveries, some bitter disappointments, and a little easy-livin' rock-and-roll from some old friends!
posted by Jay H. at 7:17 AM