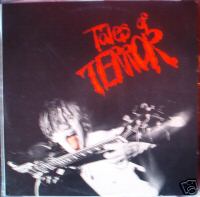 We were really happy to get some great stories out of the punk rock olde-tymers a few months back when we posted a thing on the mighty TALES OF TERROR, a band I unfortunately never saw. Even way after the fact, more recollections have been streaming into the email box. P.S.Y.L.V.I.A. sent me two emails, the first sort of giving an update on the remaining members’ whereabouts, the second detailing a crazed 1984 show. With P.S.Y.L.V.I.A.’s permission, here goes:

“….Hi, I just ran across your webpage-thing questioning information about Tales of Terror, etc. It was pretty entertaining to read how differently we all remember things. Some of the stuff is completely off-base--but then we all have our memory lapses. I spent a whole lot of time with the Terror, as Trip was my roommate, and best friend, when he joined the band. I do know that Mike(I'm a Dick) Hunter--aka Thopper Jaw is living in the Bay area-either San Francisco, or close thereabouts. I saw RatsAss last November at a Wino's formal in SF. Trip is still doing Ding Dang and living in Sonoma County. I KNOW these last three won't let Ferguson (editor’s note: the poorly-regarded CD Presents guy) re-release their recording without causing a ruckus.

It was really a shame with Dusty--He had finally gotten back with Christy, they were gonna get married, yet he continued his drug thing. I had planned to bar-b-que with them the weekend following his death. I was pretty shaken when he died. This year--2005--is 20 (yes-TWENTY) years since Lyon was killed. I can't believe how quickly it's passed.

Anyhow--I could go on for days with stories of these guys. They've all been huge parts of my life--one still is. The saddest part is that my Terror record broke, and all I have is a second generation tape of the record that you can't hear very well.

I'll never forget the days of Tales of Terror--they changed so many lives--with acid, with music, with just being playful, silly, brilliant, young, and full of energy. Thanks for the trip down memory lane--as if any of us could forget!!!.....”

“…..I'm reminded of a show that must of been in like early 1984 at the On Broadway. Tales of Terror were playing with Fang and Code of Honor. Trip, Sammytown, some girl and I had been terrorizing Tilden Park in Berkeley on the 3rd or 4th day of what we called "carnage". This is when you take progressively more and more hits of acid for as many days as you can pull it off. So, yeah--it was like the 4th day and we got to the On Broadway in flaming psychedelia. The costumes alone are worth pages of description. Lyon had a rotten grapefruit-and other treasures-inside the back plate of his guitar. Dusty looked very dusty. Hunter was Hunter. Pat- RatsAss -was schlint. And I've yet to see anyone mention Shade Vegas. Otherwise known as Padds or Dave. Shade was the "roadie"--ha ha. Anyhow--I think it was all around the time that Trip had a great top hat--courtesy of UC Berkeley prop department. They get on stage, the place is packed, it's sweaty, smoky (you could still smoke indoors), and these guys were on fire. The crowd was so lit up! They played so fierce and so well, that for once, Fang was bummed to have to follow their set. Fang and Code of Honor followed and it is truly one of the most energetic, charged, righteous, crazy-acid-trip shows in memory. The carnage continued for a day or so."

Thanks to P.S.Y.L.V.I.A. for taking the time, and if anyone wants to add some thoughts on this unheralded but incredible hyperdrive bomber long-haired punk rock band, please do.
posted by Jay H. at 8:06 AM