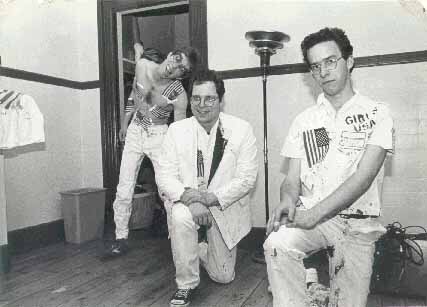 Another record that’s been criminally under-heard and that remains way, way out of print – and it was a posthumous collection to boot. THE GIRLS were a Boston group mucking around the edges of that city’s punk scene around 1976-79, but who had far more in common with the weird noise and avant-futurisms of kindred souls PERE UBU and THE RESIDENTS. They epitomize the free-thinking boundary pushing that a sub-section of the early American punks quickly made their own into after letting punk fuel the internal fire. Where The Girls differed from the aforementioned is the general lack of art-damaged abrasiveness in their music – though there are squiggly oscillations and heaps of guitar and Allen Ravenstein-worthy synth feedback all over their songs, it’s tempered with a real 4/4 rock and roll structure that keeps a solid beat moving throughout. Ubu’s Hearthan Records imprint actually put out The Girls’ first 45, “Jeffrey I Hear You / The Elephant Man”, the only non-Cleveland thing the label ever thought worthy of bothering with. There’s also traces of MODERN LOVERS playfulness in tracks like “Pedestrian Walk”, which bounces like a Gidget beach party number played in the MIT quad after science class. The rockers that have been my favorites since I first heard this record are “Methodist Church” and “Keep It Simple” – fast, short, sharp shocks of spazz guitar and very busy keyboards shorting out the mixing board in short order. Singer David Hild often affected this sort of “demented clown” persona in his vocals and lyrics, which conjures up images of a depressed sad sack pouring his scribblings out of notebooks & onto stages with not a care in the world how it’ll be received. True or not, it’s how great art is often made, very similar in feel to the early HALF JAPANESE in that pleasing who-in-god’s-name-are-these-guys-&-where-did-they-come-from way. You probably won’t mistake the Girls’ “Reunion” LP for great art from a higher strata, but as a lost artifact that’s worthy of serious crate digging – well, I hope you don’t have to for long. Reissue of this, like the Morlocks EP reviewed Tuesday, will likely cause well-deserved buckets of digital ink to be spilled and untold hundred of dollars to be spent.
posted by Jay H. at 6:35 AM