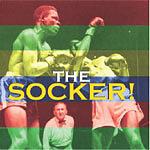 In the early-mid 1990s a slew of incredible reissue comps came out detailing the wealth and bounty of American 1960s soul music: "Downtown Soulville", "All Night Soul Stomp", "Pow City", "Buttshakers", "Shakin' Fit" and so on. I thought it was truly a bottomless pit of riches at one point and couldn't believe how many great 45s came out during that period, but then the following 5-6 years there'd been very little (outside of a few decent funk comps) to help me keep the faith. Figured the jig was up and everything truly classic had been comped & sold. That was until I started listening to the WFMU "Downtown Soulville" show online fom time to time -- this guy has just cratefuls of honking 45s from the deep South, Detroit etc., and I knew that as soon as someone secured the rights (or didn't) to a lot of the rare indie soul 45s "Mr. Fine Wine" was spinning, there'd be more knockout compilations on the way.

Here's #1. "THE SOCKER" is as quaking as any of those mentioned above, and weighing in at 28 boss cuts, there's over an hour+ of ass-rattling entertainment to be had. I wasn't sold one bit after the first two medicore cuts, but starting at track #3, a whomper called "The Soul Stroke" from KING EARNEST, "The Socker" is as hot as it comes. Listening to these things I can only semi-wistfully picture myself frantically flipping through boxes of unmarked, no-sleeve 45s in some musty record store to secure these gems -- hard sometimes to balance the thrill of the hunt with the ease & relaxation that comes from letting someone else bring it all to you. No, maybe it really isn't that hard. Top picks are HARVEY CLARK's massive "Do Your Own Thing" and a way over-the-top strutter called "A Lady's Man" by THE VOLCANOS. I was surprised to see CASH McCALL's awesome "I'm In Danger" on here -- my musician uncle actually toured with & played piano for that guy around the Pacific NW in the 80s. Bold stuff through and through, and since the CD "only" lops off a couple of the tracks from the two previous LPs that make it up, I'm recommending going digital this time to keep the joint greased with no flipping required.
posted by Jay H. at 9:15 AM