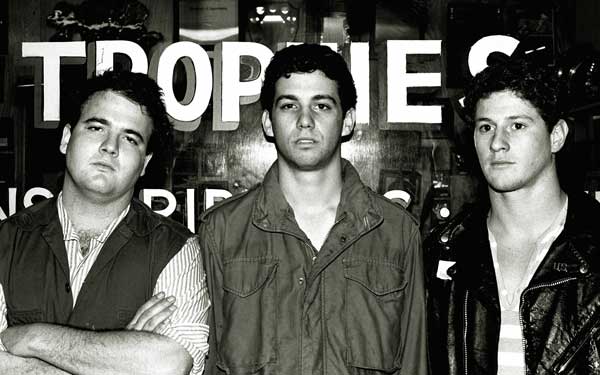 "We Jam Econo : The Story of The Minutemen" is screening all week in San Francisco as we speak; I was fortunate enough to find a scalper on the sold-out opening night last Friday kind enough to sell me her extra with no markup. Yeah, the legend has grown, no doubt about it, but I remember even back in the early/mid 80s -- those people who were into THE MINUTEMEN were really into The Minutemen. In high school I tried in vain to convince some friends to go to Palo Alto (!) with me to see the SST tour (known as "The Tour") featuring the Minutemen, HUSKER DU, MEAT PUPPETS, SACCHARINE TRUST and -- wait for it -- SWA. Missed it, and later that year when D. Boon died -- and I had just really fallen hard for the band's back catalog -- I kicked myself up & down the dorm room for not being a brave 17-year-old & hoofing it there by myself. It was very small penance to have seen several of the earliest fIREHOSE shows that next year, but because I did, I at least got to experience many of SST's best & worst either opening or headlining, from the DIVINE HORSEMEN to GONE. But jesus, enough about me -- how was the friggin' film??

It's great. The two guys who put it together obviously passionately did so on a shoestring, an irony not lost on them, doubtless, given The Minutemen's admirable overall working man, "econo" ethos. They gathered footage from about 5 different shows spanning the band's career, and feathered it in liberally between dozens & dozens of testimonials from scene celebs of the day. A few things struck me watching folks like Jack Brewer, J. Mascis, Ian Mackaye, Kira Roessler, Dez Cadena, Byron Coley & many many others talk up the band -- first, this band touched a ton of hearts in a way that most bands never will. It may be in small part to the Minutemen's tragic end, but I'm certain it's far more attributable to what an incredible trio of guys they were -- intelligent, funny, down-to-earth, dedicated to spreading the good word about art & music, and about as non-condescending to the audience as any band's ever been. I mean the Minutemen talked about having shows that started at 7pm & in the suburbs or blue-collar outlying towns "so the working man can get to the shows". As a working man, though I doubt they meant me, this would have been fantastic, and would probably have cost the band a significant amount of hipster points. Like they cared. They also took the meathead 1981-82 punk rock scene head-on, and quite literally challenged the jocks with abstract, crazy, bullrushing jazz lines woven into the fabric of of traditional punk. They played softly, or flat-out jammed improvisationally when opening for Black Flag in Huntington Beach or wherever. The name "Beefheart" comes up often in this documentary, and little wonder. These guys didn't expand the punk rock canvas, they exploded it in a way that slid under the radar of virtually everyone but the musos. (They're well represented here, too, in the persons of Joe Baiza, the Urinals/100 Flowers guys, the Slovenly folks etc.). Watt mentions his then-love for WIRE and the POP GROUP, and that makes a whole heck of a lot of sense as well.

Another thing I noticed, just because it's impossible to escape for all of us, is how old everyone is now. Far more time has passed between the Minutemen's untimely end & this documentary's release -- 20 years -- than I thought could truly be possible. The 28-year olds of 1985 are the 48-year-olds of today, with lots of hard drinking and overall heavy lifting having taken their tolls. Say what you will about such a superficial observation, but it was jarring nonetheless, recognizing of course that I myself am well on the same path. The documentary is held together by two intertwined MIKE WATT interviews, who naturally serves as the defacto narrator and key historian. I was gonna get really pissed about the initial overdose of D. Boon/Mike Watt play and the lack of George Hurley recognition when the film sort of turned and devoted about 5 minutes to Hurley's genius drumming. I didn't used to vote him #1 drummer in the Flipside poll every year for nothing! As great as Boon & Watt were, without Hurley's bebop-infused, rimshot pounding and cymbal manipulations, this band wouldn't have been half the champions they ended up being. Still probably my all-time favorite drummer in rock and roll, and a total unlikely drumming lunatic -- a toiling-class surfer & initial drummer-for-hire who sort of stumbled onto the Minutemen (then called The Reactionaries) and learned punk rock from them via near-osmosis.

"We Jam Econo" is an excellent documentary about a very special band. The fact that I feel more so about the band than I have in years means the film did its job quite well. I recommend it with a man-falling-out-of-chair if it happens to hit your town on the film tour now underway. Oh hey -- one more thing. We got to ask the filmmakers a bunch of questions after the screening, and they said that a 2xDVD set is in the works, a set that will contain the film, tons of extra interviews, and four complete Minutemen shows, the ones that were all over this documentary. Put that in your pipe and smoke it, punker!
posted by Jay H. at 8:30 AM