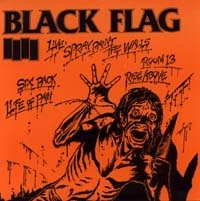 Easily the best BLACK FLAG live thing I’ve ever heard. That includes Dez singing “American Waste” in a raincoat in that Target Video, which had me up & slamming my ass off so hard I spilled the Cheetos and knocked a couple of my Hummel figurines off the mantle. A little research on the web indicates that it may very well BE that same show, but other research indiciates that it’s someone named “Henry” on vocals, whoever that is, and folks, that ain’t Henry – that’s Dez Motherfuckin’ Cadena, the baddest-ass vocalist in Black Flag’s history, if not in history writ large!! Oh man, this EP is a five-song jackhammer that showcases the most gutteral and raw of voices ripping through whoppers like "Rise Above", "Life of Pain", "Spray Paint", "Room 13" and "Six Pack". I'd place it at about 1980. An audience may actually not be present, just like that Target Video, which was filmed on a soundstage, but there are times where it sounds like the mic's been snatched from Dez's hands by some preening goon -- so who knows. What I do know is how obnoxiously great Greg Ginn's lead-in to each song is -- sure, me and everyone else who's ever written about the band talks about it, but that 1-2 seconds of ear-breaking feedback he'd let out before each song is just so ominous and intense, you know that when the band kicks in -- perfectly, on time, every time -- it's gonna be great. Give me a chance to be transported in time to me a dozen shows and I'd pick this one (or any other featuring the 1980 lineup) among the litter for sure.
posted by Jay H. at 9:42 AM