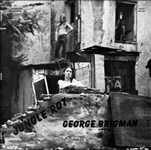 I think Lexicon Devil’s Dave Lang accidentally coined a term when he tagged last year’s MICHAEL YONKERS reissue as “Record Collector Rock”. Without quite realizing it myself, there’s a whole genre of reissues slavishly praised to the skies by people whose primary occupation and station in life is to collect records. I am often one with these people, and have for much of my life walked many a mile in their moccasins. Of the examples Lang offered up, I’m a huge fan of DEBRIS and THE DEVIANTS. But you know it’s record collector rock when no one with less than 2000 pieces of vinyl in their houses/garages owns or will own the thing. GEORGE BRIGMAN is destined to become a hallmark of record collector rock. “Jungle Rot” is his debut offering, reocrded when he was just an 18-year-old Baltimore ne'er-do-well, a "private press" LP from '75 that never really got out there to the people. Until today.

If you crossed that aforementioned MICHAEL YONKERS stuff with some of the spookier/spacier VERTICAL SLIT bad-mood music, you’d get the gist of what Brigman was about. Dense and layered guitar workouts, with echo-chamber vocals and Krautrock pacing at times. He also tosses in some weird harmonica for a dirty, acid-drenched blues element that adds about as much as it subtracts. It all smacks of a guy who very likely felt way out of place with the Eagles/Carly Simon vibe in 1975, and went about as far to the left as he knew how. He didn’t make anything even close to a classic, but there’s no doubt it’s a “Ultra-rare OOP M/VG++” private press LP that deserved to be digitized and given a fair hearing by record collectors and non. Anopheles Records, which is starting to make a habit of this sort of thing, deserves a nice tap on the back for helping the connoisseurs of record collector rock to throw another musical trophy on the psychic mantle.
posted by Jay H. at 8:40 AM