JOSEPHINE FOSTER & THE SUPPOSED : "ALL THE LEAVES ARE GONE" CD..... 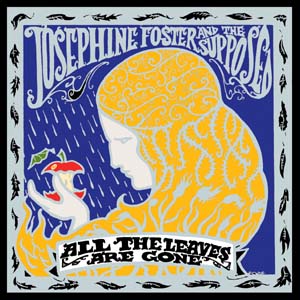 After a half dozen listens that ranged from puzzled to quizzical to ramped-up to bowled over, I am ready to announce my strong support for & backing of JOSEPHINE FOSTER & THE SUPPOSED. Ms. Foster, you may remember, was the folk chanteuse responsible for the single best song on the Arthur magazine modern folk comp "The Golden Apples of The Sun" last year. “Little Life”, however, only hinted at what a baroque banshee Ms. Foster is – and at how successful she’d quickly become at fusing twisted avant-folk with hard, squealing psychedelic rock. “All The Leaves Are Gone” is really her first record, released late last year; there’s been a solo CD put out in 2005 that I know has garnered additional praise, but that I haven’t yet heard. Before we go any further, we’d probably better have a little chat about Josephine Foster’s voice. Like JOANNA NEWSOM’s, Foster’s lungs take a little bit of patience, but at least she sounds like a w-o-m-a-n, albeit a woman transported from 16th century England tearooms by way of Mary Poppins films. She trills and howls and falsettos like a hippie mystic who’s playing English folksinger – and you know what? It works. She has a singular set of pipes, well suited for both rock & roll and quiet balladry. You may just need to curl up with it a little before passing “go”.

Once there, though, the rewards are plenty. Her band The Supposed are excellent folk/psych musicians bent on telekinetically channeling Brian Jones on tracks like the incredible “Well Heeled Men” and “Jailbird”. Some of their “pieces” are longish journeys under & around the howling vortex of Foster’s vocal explorations, yet most keep pace with a relatively basic 3-4 minute rock song length and structure. Anything that might sound grating at first listen is smoothened when you realize just how remarkably inventive & unique this combo is. Playing off a woman like Foster and her weird-ass songs would be a challenge for anyone, but these guys just make it sound like they’re just there to kick out the jams. Don’t make the mistake of lumping this in with the Newsom and Banhart records, records which, while pleasant for many (like me), also drive away well-meaning and informed individuals in droves. Josephine Foster is a big cut above that jazz, and she has quickly become one of the standard-bearers for what modern rock music ought to sound like in 2004-05.
posted by Jay H. at 7:16 AM