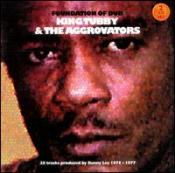 The way it worked back in KING TUBBY’s heyday (1975-77) was that all the top producers of the era would finish up their sessions recording Jamaica’s top reggae vocal and band talent, then hightail it over to Tubby’s studio so he could spend the next couple of days reworking the mixes into nearly-unrecognizable dubs. One of Tubby’s top production patrons was BUNNY LEE, in fact Lee is said to have been the guy that brought more songs to the King to work over than any other. This double-CD set captures a huge rush of work that piled up during those two crucial years, omitting I’m sure another couple hundred of items that Tubby and Lee collaborated on during those months alone. Virtually all were b-sides of 45s; I’ve found no evidence indicating these have been on LPs save for comps made after the fact. It’s a solid, solid set. Lee used THE AGGROVATORS as his main band, and they’re pretty much the holy grail when it comes to Jamaican backing bands of the 70s. While you can hear a good deal of trickery on just about any track, King Tubby’s legendary crashes and thunderclap flourishes seem to have come later in his career, since all of these come off as slightly more restrained & filtered drum & bass instrumentals than deep, mystical heavy-ass dub. That’s not to say there aren’t some scorchers embedded throughout the disc – I’m not the type to do deep research on where the original “riddim” came from (honestly, these are so reworked I could care less), but “Race Dub” and “Dub Assassinator” in particular are really “groovin’ high” if you know what I mean. You’ll find this one a strong overview of King Tubby’s techniques & an easy-to-digest set over a sitting or two.
posted by Jay H. at 12:17 PM